Authorities say the second floor of the Lake Cecile Inn and Suites in Osceola County was intentionally set on fire. When deputies arrived to investigate, they said a riot ensued.

Firefighters worked to extinguish the blaze on Tuesday at the Lake Cecile Inn & Suites on W. Irlo Bronson Memorial Highway.

Osceola County deputies made several arrests at a motel where they said a riot broke out when they responded to a report of arson.

Inside the second-floor motel room, mattresses were set ablaze by what investigators are calling arson. Now it is charred and empty.

A resident who lives just two doors down from the fire did not want to give his identity but said he saw the fire around 5 a.m. and the fight that came soon after.

“I heard a huge bang and my parents were running out the door and I ran out with them and I look to my left and I see the fire blazing out,” the witness said. “I was just thinking get outta here because it could go farther.”

When deputies and fire rescue arrived, they said the unit was engulfed in flames and had to work quickly.

“Deputies attempted to get people away from the hotel for their safety obviously,” Jacob Ruiz with the Osceola County Sheriff’s Office said. “As the fire engines arrived, the crowd was resistant toward their arrival.”

That’s when deputies said a riot broke out. 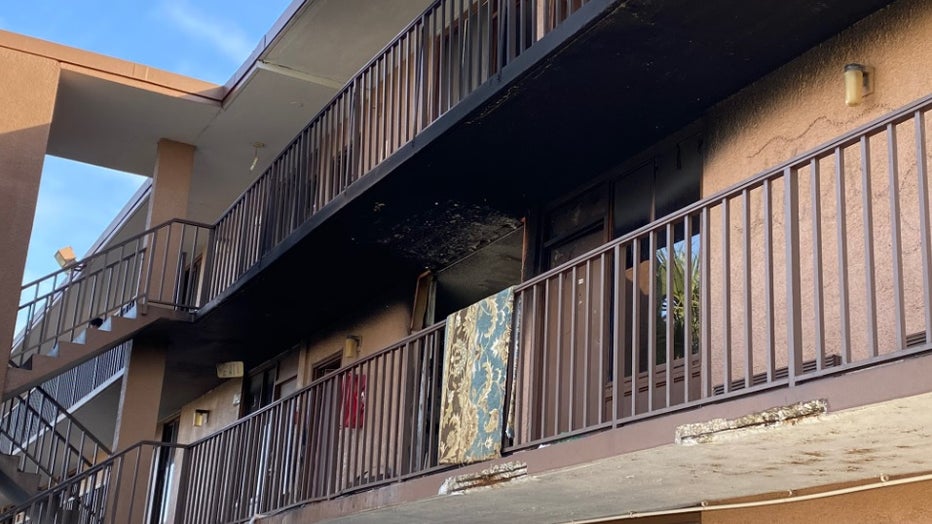 “Some people didn’t want to leave,” the witness said. “So the cops decided that they had to take it into their own hands.”

“We had eight arrests,” Ruiz said. “Made one arrest for arson and burglary and the other charges related to the other arrests have to do with battery on a law enforcement officer, resisting arrest and inciting a riot.”

Deputies said three of the people under arrest were transported to the hospital, one of them a pregnant woman.

Deputies said they did not see any injuries on those three people, but that they insisted on being checked out.  The fire and fight are all still under investigation but could have stemmed from a misunderstanding.

Some residents said they thought they were being kicked out of their homes related to a history of poor building conditions.

“There’s been some issues with this property for the past month or so,” Ruiz said. “There’s something about no power, no water, the utilities weren’t running. So there have been some issues there and we have been at that location several times for disturbances of such sorts.”

Now because of the work of an arsonist, deputies said five families are out of their homes.

“So now we have to move to another hotel because we can’t stay in ours,” the witness said.

"They say when @OsceolaSheriff deputies arrived at the Lake Cecile Inn, a 'riot' broke out and several people were arrested," reported FOX 35's Amanda McKenzie.