Video from the bridge in Del Rio, Texas shows thousands of Haitian migrants camping below. Credit: Michael Garofalo via Storyful

The United States on Sunday tried to block the Mexican border in an effort to stop the flow of thousands of Haitian migrants who have set up a makeshift camp in the Texas border town of Del Rio.

About a dozen Texas Department of Public Safety vehicles lined up near the bridge and river where Haitians have been crossing for almost three weeks. Yellow police tape was being used to block them from using a small dam to walk into the U.S., but the migrants quickly found other ways to cross nearby.

The attempted border closure happened Sunday as officials also began flying some of the migrants back to their poverty-stricken homeland.

The U.S. sent three flights each carrying 145 people, with all three landing at the Port-au-Prince airport Sunday afternoon. The number of flights is expected to reach at least six per day shortly, according to a U.S. government official who spoke on condition of anonymity because the official was not allowed to discuss the issue publicly.

Families arriving on the first flight held children by the hand or carried them as they exited, and some of the 145 deportees covered their heads as they walked into a large bus parked next to the plane. Dozens lined up to receive a plate of rice, beans, chicken and plantains as they wondered where they would sleep and how they would make money to support their families.

A minibus from the International Organization of Migration also was posted at the airport. It was filled with brightly colored bags containing toiletries, hand sanitizer and hair ties.

All the deportees were given $100 and tested for COVID-19, though authorities were not planning to put them into quarantine, said Marie-Lourde Jean-Charles with the Office of National Migration.

Meanwhile, a large number of buses arrived Sunday in Del Rio, and "many, many more" were coming to transfer Haitians to expulsion flights, U.S. immigration detention centers and Border Patrol holding facilities. Departure cities for Haiti-bound flights have yet to be finalized and are being "actively planned," the official said. 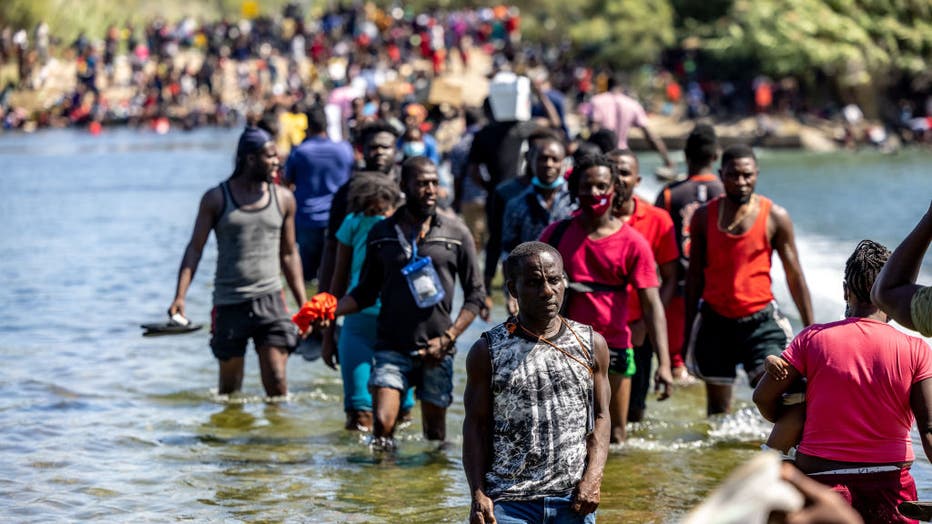 DEL RIO, TX - SEPTEMBER 17: Migrants walk across the Rio Grande River carrying food and other supplies back to a makeshift encampment under the International Bridge between Del Rio, TX and Acuña, MX on September 17, 2021 in Del Rio, Texas. The makesh

The local sheriff estimated Friday that the crowd of migrants had swelled to more than 14,500 people in the city roughly 145 miles west of San Antonio. It sits on a relatively remote stretch of border that lacks the capacity to hold and process such large numbers of people. Most of the crowd was camped under a bridge.

They’ve pitched tents and built makeshift shelters from giant reeds known as carrizo cane. Many bathed and washed clothing in the river.

Many have lived in Latin America for years but now are seeking asylum in the U.S. as economic opportunities in Brazil and elsewhere dry up.

Some said the recent devastating earthquake in Haiti and the assassination of President Jovenel Moïse make them afraid to return to a country that seems more unstable than when they left.

Scores of people have been wading back and forth across the Rio Grande, re-entering Mexico to purchase water, food and diapers in Ciudad Acuña before returning to the Texas encampment.

On Sunday, a Mexican police officer on the Mexican side of the border said migrants will not be allowed to cross anymore. He would not give his name. But an Associated Press reporter saw people still crossing the river into the U.S. about 1.5 miles east of the previous spot.

Several hundred were sitting along the river bank on the U.S. side as 50 to 60 at a time made the crossing to and from Mexico through waist-deep water. There were a few U.S. officers observing the crossings, but taking no steps to stop them.

Some migrants said they were undeterred by the forthcoming plan from the Biden administration to expel them and that they planned to stay and seek asylum.

RELATED: US will fly 'massive' number of Haitian migrants to Haiti, official says

Meanwhile, Haitian Prime Minister Ariel Henry wrote Sunday on Twitter that he is concerned about conditions at the border camp and that the migrants would be welcomed back.

"We want to reassure them that measures have already been taken to give them a better welcome upon their return to the country and that they will not be left behind," he tweeted. Henry did not provide details about the measures. A Haitian government spokesman could not be immediately reached for comment.

Another Haitian political leader questioned Sunday whether the nation could handle an influx of returning migrants and said the government should stop the repatriation.

"We have the situation in the south with the earthquake. The economy is a disaster, (and) there are no jobs," Election Minister Mathias Pierre said, adding that most Haitians can’t satisfy basic needs. "The prime minister should negotiate with the U.S. government to stop those deportations in this moment of crises."

The U.S. Department of Homeland Security said Saturday that it moved about 2,000 migrants from the camp to other locations Friday for processing and possible removal. A statement from the agency also said it would have 400 agents and officers in the area by Monday morning and would send more if necessary.

Haitians have been migrating to the U.S. in large numbers from South America for several years, many having left their Caribbean nation after a devastating 2010 earthquake. After jobs dried up from the 2016 Summer Olympics in Rio de Janeiro, many made the dangerous trek by foot, bus and car to the U.S. border, including through the infamous Darien Gap, a Panamanian jungle.

It is unclear how such a large number amassed so quickly, though many Haitians have been assembling in camps on the Mexican side of the border to wait while deciding whether to attempt entry into the U.S.

The number of Haitian arrivals began to reach unsustainable levels for the Border Patrol in Del Rio about 2 ½ weeks ago, prompting the agency’s acting sector chief, Robert Garcia, to ask headquarters for help, according to a U.S. official who was not authorized to discuss the matter publicly.

Since then, the agency has transferred Haitians in buses and vans to other Border Patrol facilities in Texas, specifically El Paso, Laredo and Rio Grande Valley. They are mostly processed outside of the government's pandemic-related authority, meaning they can claim asylum and remain in the U.S. while their claims are considered. U.S. Immigration and Customs Enforcement makes custody decisions, but families can generally not be held more than 20 days under court order.

RELATED: Over 800 unaccompanied migrant kids apprehended at the border in a single day as numbers surge

Homeland Security’s plan announced Saturday signals a shift to use of pandemic-related authority for immediate expulsion to Haiti without an opportunity to claim asylum, the official said.

The planned flights, while potentially massive in scale, hinge on how Haitians respond. They might have to decide whether to stay put at the risk of being sent back to an impoverished homeland or return to Mexico. Unaccompanied children are exempt from fast-track expulsions.

Homeland Security said in a statement that, "our borders are not open, and people should not make the dangerous journey."

"Individuals and families are subject to border restrictions, including expulsion," the agency wrote.