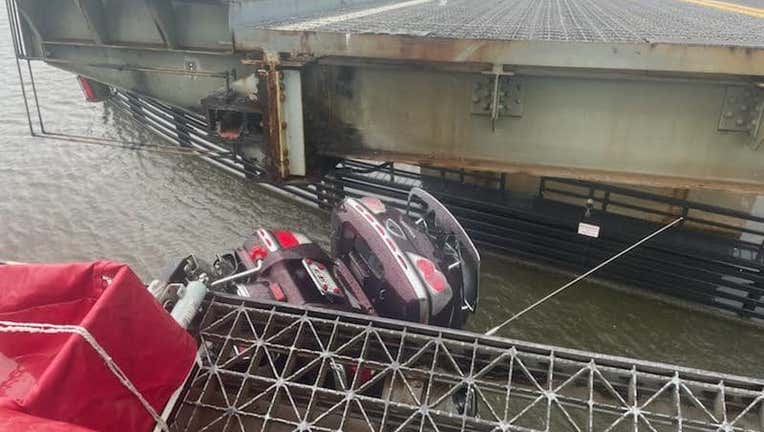 DAYTONA BEACH, Fla. - Harrowing photos from Daytona Beach Police show a motorcycle dangling over the edge of the Main Street drawbridge in Daytona Beach. The bike's trailer was the only thing keeping it from falling into the water, below.

"By the time I'd noticed it, the bridge was about halfway up. Firemen were already starting to show up and were standing on the top over there," said Carl Kirby, a parking lot manager nearby.

Daytona Beach Police say it happened about 10:00 Saturday morning. Amazingly, the driver wasn't hurt in the accident. The bridge re-opened at around 12:45 p.m. Police say the rain was pouring down when the rider smashed through the traffic arm and went over the edge of the bridge. People working in the area say the road closure took a big chunk out of the day's revenue.

"All of the businesses had to slow down quite a bit," said Felipe Suarez, a parking lot manager, "We're just now getting a few bikers trickling in, but it's already two o'clock, so we should get a lot more business if it weren't for that.

Police say no other people or vehicles were caught-up in the crash.

This isn't the first incident that's happened on the Main Street Bridge. In March of this year, a biker actually jumped the drawbridge as it was opening, and shortly after that, a driver in an SUV did the same.

Visitors say you've got to pay attention on the road.