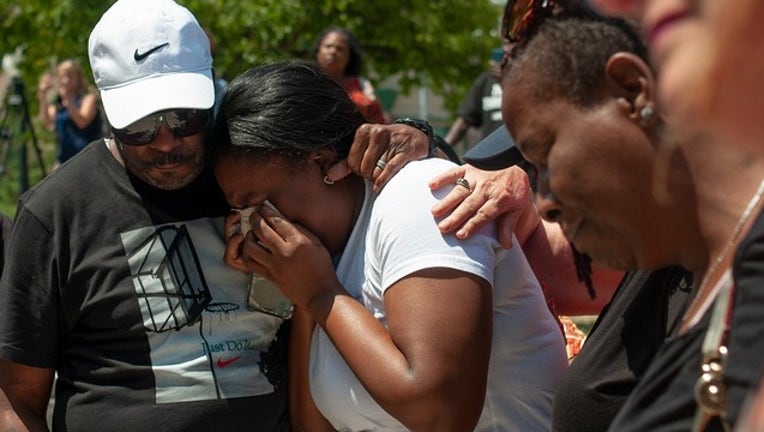 People gather for a vigil for the victims of the mass shooting that occurred on August 4, 2019 in Dayton, Ohio. The gunman left nine dead and another 27 wounded. (Photo by Matthew Hatcher/Getty Images)

FOX NEWS - The gunman who fatally shot nine people -- including his sister -- and injured more than two dozen others in Dayton, Ohio, early Sunday was reportedly suspended during his high school years for compiling a “hit list” of those he wanted to kill and a “rape list” of girls he wanted to sexually assault.

Conner Betts, 24, who was killed by police less than a minute after he opened fire outside a crowded bar, showed signs of hostility years before Sunday's violent outburst, according to former classmates.

Betts was reportedly suspended in his junior year at Bellbrook High School after a list of names was found scrawled on a wall in a school restroom, the former classmates said. In an earlier suspension, Betts came to school with a list of female students he wanted to sexually assault.

During her freshman year, the former cheerleader said she received a phone call from a police officer who informed her that her name was included on a list of potential targets.

"The officer said [Betts] wouldn't be at school for a while," she said, referring to the boy's suspension. "But after some time passed he was back, walking the halls. They didn't give us any warning that he was returning to school."

The discovery of the hit list in early 2012 prompted a police investigation and caused roughly one-third of students to skip school out of fear for their safety, according to the AP report.

Betts had no apparent criminal record as an adult, though if he had been charged as a juvenile those offenses would typically be sealed under state law.

"There's nothing in this individual's record that would have precluded him from getting these weapons," Dayton Police Chief Richard Biehl said Sunday.

Former Bellbrook Principal Chris Baker said he "would not dispute that information" when asked about the hit list suspension, according to the Dayton Daily News. Baker, who resigned this summer, declined to speak further on the matter.

A former middle school classmate told the local paper that Betts had an unusual obsession with killing and death. Betts, she said, once told her that he fantasized about tying her up and slitting her throat.

“He knew it wasn’t normal,” she said. “He and I talked at length about him getting help.”

The woman said she and her parents informed Bellbrook police about the chilling confession, but said that she felt she wasn’t taken seriously.

Background checks of Betts’ social media conducted by the Daily News also discovered alleged writing of phrases such as “All Shall Be Annihilated,” “Absolute Carnage” and “Bloody Massacre.”

“He was always a bit of an oddball,” Howell said. “He had a dark sense of humor — jokes about people dying. He would wear all black. I remember sensing a dark energy around him.”

“I think this is less of a hate crime and more of an ‘I hate everybody’ crime,” he added. “I honestly feel more comfortable now knowing that he’s gone.”