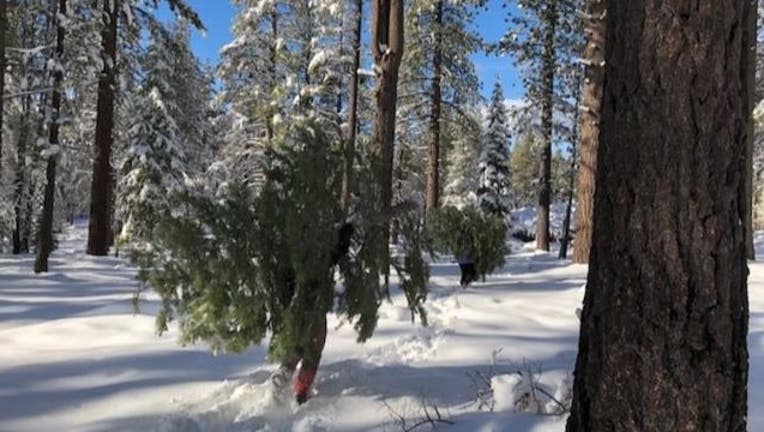 LAKE TAHOE, Calif. - A forestry advisor for the University of California is a big proponent of cutting down Christmas trees on public land as an inexpensive, family-friendly holiday ritual and a way to thin the forests of excessive small trees.

Susie Kocher, who works for the UC Cooperative Extension, has been trekking to the U.S. Forest Service land for the last two decades -- saw and $10 permit in hand -- to cut down her own white fir.

In addition to driving in rugged terrain and carrying the tree out of the forest, Kocher must follow strict rules: The tree trunk has to be smaller than six inches in diameter and must be within 10 feet of another tree.

“You may need a 4-wheel drive, and yes, you trudge through snow,” Kocher said. “It’s not for everyone. But for those who want that adventure, it’s super fun. I do it because I don’t think there’s a substitute for a real tree in the house. And we always turn it into a family party.”

But Kocher does it for another reason too: “I feel good about removing excess small trees.”

Despite what it takes to cut down your own tree and not buy it on a lot or even at a Christmas tree farm, Kocher isn't alone in her pursuit of a rugged Christmas experience. The Lake Tahoe Basin Management Unit sold out of the allowed 2,000 of these permits in two days in mid-November.

Forest management has made headlines recently, after President Trump criticized poor forest management for the California wildfires when he visited Butte County in late November.  “There is no reason for these massive, deadly and costly forest fires in California except that forest management is so poor," Trump tweeted, threatening to cut off federal funding for forest management. "Billions of dollars are given each year, with so many lives lost, all because of gross mismanagement of the forests. Remedy now, or no more Fed payments!"

Trump reversed course on the emergency funds. But he reignited a national debate on how to best curb wildfires in the country.

There is some truth to what Trump said, Kocher and others acknowledged.

“Active forest management is an important part of reducing the risk of fire in the forest and to make the forest healthier,” she said. “We have overly dense forests.”

Logging large trees isn’t the answer, Kocher said, but thinning the forests of excessive, smaller trees is something that’s generally accepted and a practice that dates back at least to Native Americans who would actively burn the forests. The general consensus of most scientists, Kocher said, is to leave the big trees the reduce the number of small trees.

“We believe in an aggressive forest management,” she said. “We have long had a fuels program that reduces excess vegetation.”

As for those chopping down their own Christmas trees, Herron said those families are doing their part in thinning out the forest, even if their overall impact is a fraction of the overall forest management program.