A court's order has stopped plans to end life support for a 9-month-old girl who was born with a rare heart defect at a Fort Worth hospital.

FORT WORTH, Texas - A court's order has stopped plans to end life support for a 9-month-old girl who was born with a rare heart defect at a Fort Worth hospital.

According to a release from the Cook Children's, Lewis has undergone several "complex" surgeries, and also suffers from "chronic lung disease and severe chronic pulmonary hypertension."

The hospital said it has "become apparent her health will never improve," despite their best efforts. Her condition is "irreversible," and her physicians believe she is "suffering," according to the release from the hospital.

The hospital is allowed to stop treatment under the Texas Advance Directives Act, also called the “10-Day Rule,” which allows hospitals to withdraw life sustaining treatment after the patient is in "irreversible condition."

The family then has 10 days to transfer the patient to another facility. Cook Children's officials say they have reached out to 19 other medical facilities across the country - including Children’s Hospital of Philadelphia, Johns Hopkins, and Dallas Children’s - and all have agreed with their assessment, and "feel there is nothing more they can provide to help improve" her life.

Cook's Children reportedly invoked that "10-Day Rule" on October 31, and Sunday marked the day Lewis would have been taken off life support.

"While we believe every child’s life is sacred, we also believe that no child should be sentenced to a life of pain. Removing this beautiful child from mechanical ventilation is a gut-wrenching decision for Cook Children’s physicians and staff, however we feel it is in her best interest to free her from artificial, medical intervention and suffering," hospital official Winifred King said in a release.

Before she was removed from life support Sunday, a court granted a temporary restraining order that gave the family more time. 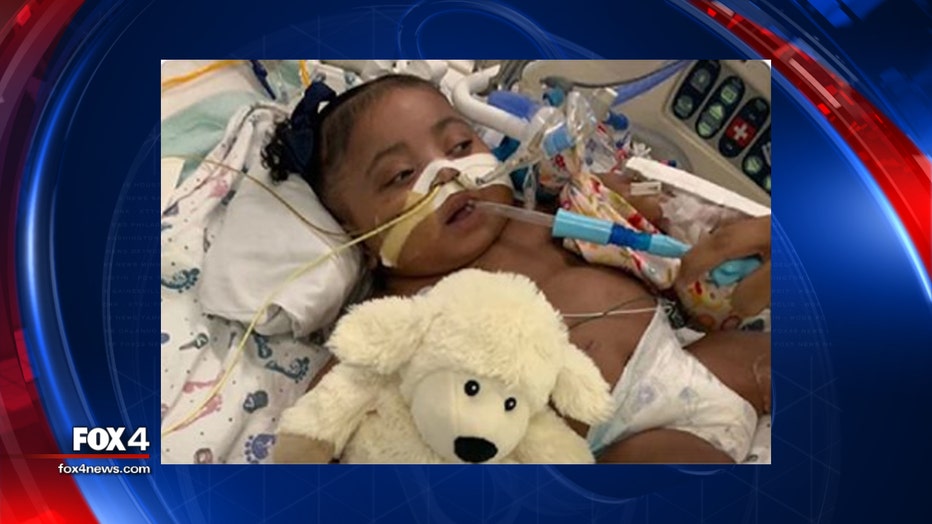 “Her life matters. That’s her only baby,” Lewis’ family said.

Family members surrounded Lewis’ mother, Trinity, outside Cook Children’s Sunday night as the first-time mother cried tears of relief after learning that her daughter will continue to live.

Lewis was supposed to be taken off a ventilator Sunday night, but lawyers for the family obtained a temporary restraining order.

“I thought that they were going to pull the plug on my baby. I didn’t think she was going to still be here today, and that’s what I’m grateful for,” Trinity Lewis said.

At the center of this fight is Texas’ Advance Directives Act, or the 10-Day Rule, which allows a hospital to discontinue life-sustaining treatment 10 days after giving written notice if doctors consider the patient’s condition to be incurable.

“They issue a letter and say, ‘We’re pulling the plug in 10 days,’” said Rich DeOtte, with Texas Right to Life.

DeOtte and State Representative Tan Parker believe families should be given more time.

They supported a Texas Senate bill during the last legislative session that would have extended the 10-day rule to 45 days, but the bill never made it to the floor for a vote.

“The 10-Day Law doesn’t fit with Texas values. We have to provide real time for families and for providers and for hospitals to work together,” Parker said.

The family commends the hospital for everything it has done, and continues to do, to keep Lewis alive.

The family now has until November 22, when a hearing on the temporary restraining order is scheduled.

“That’s our baby and we want to give her all the chances there are,” family member Beverly Winston said.