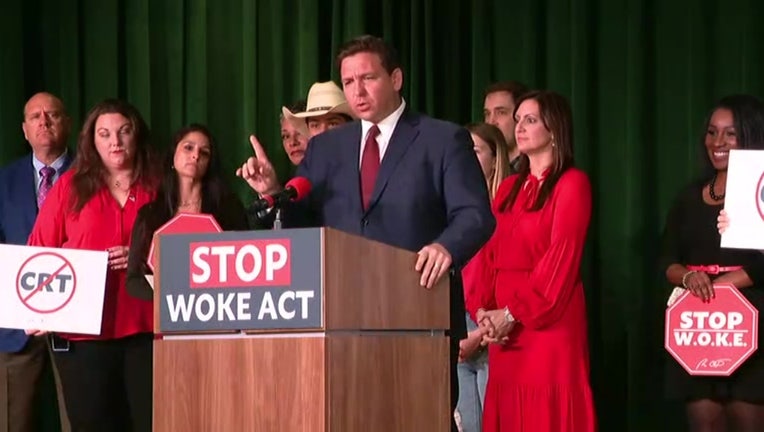 Florida Gov. Ron DeSantis has been strategic in deflecting any 2024 presidential talk as he endeavors in his gubernatorial re-election campaign in the Sunshine State. Despite efforts to mitigate any conversations about his unconfirmed presidential run, talk surrounding his potentially joining former President Trump as vice president on the ticket or even running for president himself could sway votes in his home state this November.

"I think he's amassed a tremendous amount of financial resources, which goes a long way in a state as expensive as Florida with all its various media markets. And most importantly, he's got a record he can run on. And I think [his team is] smart to continue to focus on that and to not let the 2024 chatter," Colin Reed, a Republican strategist and co-founder of South and Hill Strategies, told Fox News Digital. "Now, let's not let that overwhelm or consume or become a distraction, because I think that has a risk of potentially turning voters off."

"In my opinion, considering that the number one reason somebody votes for a candidate across the board - whether it's always Senate, House or president - is name recognition. And Charlie Crist has that recognition. He has a pretty good reputation in Florida. I'm surprised the polls aren't closer," Leslie Marshall, Democratic strategist, and Fox News contributor told Fox News Digital.

DeSantis has been treading carefully to ensure voters know Florida remains his top priority as Election Day draws closer, according to Reed. Despite the fact it would be unprecedented and possibly detrimental to one's campaign to announce a presidential run during another campaign, Reed says DeSantis 2024 talk is unavoidable.

"Voters across the ideological spectrum don't like the idea that they're just being a platform for the next thing. So, I think he wise to do that," Reed said. "So, some of his 2024 speculation and chatter is inevitable. But they have to navigate it very carefully. Take nothing for granted. They should. They remind voters of Florida why they elected him and why they should re-elect him."

"The stakes in this midterm are incredibly high, and every Republican needs to be invested in helping. Obviously endorsing and supporting candidates around the country is often a precursor to a national campaign, but it is not guaranteed," Texas-based GOP consultant Matt Mackowiak told Fox News Digital.

On August 9, DeSantis was announced to be headlining a New Mexico rally with New Mexico gubernatorial candidate, Mark Ronchetti, a candidate whom Trump has not endorsed.

"I think it sends a signal that the map is expanding for conservatives, Republicans," Reed said. "The Democrats run all three branches of government. I think there's going to be some opportunities about themselves and potentially unusual places. New Mexico could be one of them," Reed said.

On the other hand, Marshall says this is one of several examples outing DeSantis as an "on the fence" candidate, which could potentially turn voters off as they see DeSantis turning his focus to other states and potentially other races.

"Charlie Crist can and should use that to stand to run for governor and having plans, bigger aspirations for the state, for the presidency, because, you know, all you have to do is paint it as they don't really care about you. You're not here. I'm here," Marshall said.

Trump and DeSantis have been on each other's coattails in several conservative straw polls asking voters who they would vote for as president in 2024. Running on similar platforms and agendas, Trump landed first place in the Texas Conservative Political Action Conference straw poll, with 69% of the vote. DeSantis came in second with 24% of the vote.

However, DeSantis did beat out the former president in the Western Conservative Summit straw poll back in June, amassing a 71% approval rate, with Trump earning a 67% approval rate.

Despite the back and forth, Reed says DeSantis is running on his own platform and Florida voters will be voting for DeSantis, not the Trump agenda.

"I think Governor DeSantis has carved his own path in Florida, certainly his leadership from the pandemic and how he distinguished himself there on the national stage. So, I believe they are voting as a referendum on the last four years of his leadership," Reed said.

Marshall expects DeSantis to announce a 2024 presidential run following Trump's own announcement, of which the former president has been dropping Easter eggs since leaving office. However, whether he runs as vice president or as president has yet to be determined.

"I think the field of 2024 is and will be wide open. And he's going to have to compete with a slew of other candidates there. So, today's winner is tomorrow's loser," Reed said. "I think the biggest challenge he faces is having this presumed front-runner status because maintaining that over the next two-plus years, that's a challenge."