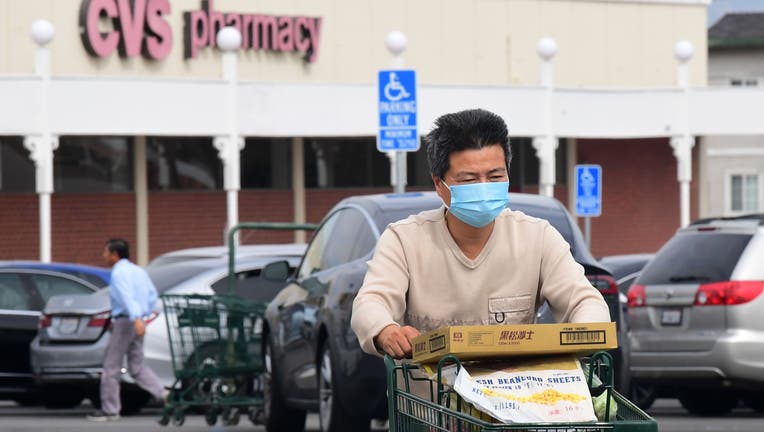 FILE - A man wears a facemask while pushing his shopping cart in Alhambra, California on February 27, 2020.

The Centers for Disease Control and Prevention has recommended wearing masks in public settings to slow the spread of the coronavirus pandemic. A new study suggests that cases of COVID-19 could be cut significantly if 80 percent of people heeded this advice.

The research, published by a group of international experts, created a model that shows the cases could be cut significantly if "(near) universal masking" is adopted.

"Universal masking at 80 [percent] adoption flattens the curve significantly more than maintaining a strict lockdown," researchers wrote in the study, which has not yet been peer-reviewed.

"Masking at only 50 [percent] adoption is not sufficient to prevent continued spread," the researchers added. Replacing the strict lockdown with social distancing on May 31 without masking results in unchecked spread."

RELATED: How long before we know if reopenings cause virus spikes?

The model the researchers built is known as the maskim simulator. One of the collaborators on the study, economist Guy-Philippe Goldstein, told Forbes that in addition to social distancing, wearing a mask is the only thing working "to flatten the curve of infections" as the world waits for treatments and vaccines.

In an interview with Vanity Fair, one of the study's authors, University of California, Berkely, researcher De Kai, said he thought this research was "pretty urgent.

“I saw the country where I grew up [China], where my family lives [now mostly in the Bay Area], about to face this pandemic without knowing much about something as simple as wearing a mask to protect themselves and others," Kai told the news outlet.

The authors also noted several countries or regions that have a history of wearing masks in public during non-pandemic times, including Macau, Beijing, Taiwan, Singapore and Japan, have seen drastic reductions in the number of cases from their respective peaks. Beijing, Singapore and Japan underwent "partial lockdown," while Macau and Taiwan did not.

By contrast, every state in the U.S. has undergone stay-at-home programs, though many are in the process of reopening in some way.

Earlier this month, a separate study on the same topic divided scientists, some of whom believed in the effectiveness of wearing masks, while others questioned the results.

As of Friday morning, more than 4.4 million coronavirus cases have been diagnosed worldwide, more than 1.42 million of which are in the U.S., the most impacted country on the planet.