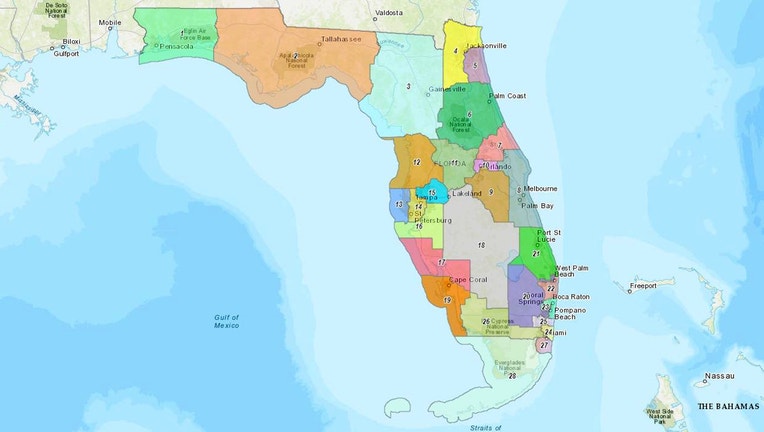 TALLAHASSEE, Fla. - Voting-rights groups went to the state Supreme Court on Monday as they try to keep alive the possibility of blocking a congressional redistricting plan that would make it harder to elect a Black U.S. House member this year in North Florida.

The filing by attorneys for the groups and other plaintiffs was the latest twist in a legal battle over a congressional redistricting plan that Gov. Ron DeSantis pushed through the Legislature in April.

But in a 59-page emergency petition Monday, the plaintiffs asked the Supreme Court to place a stay on the 1st District Court of Appeal’s order. The plaintiffs’ attorneys wrote that such a move would allow county elections supervisors to prepare to carry out the DeSantis-backed plan and a different plan that Smith approved in his temporary injunction.

"A stay of the First District’s decision is necessary to preserve this (Supreme) Court’s ability to adjudicate the parties’ appeals in time for the 2022 elections," the filing said.

The case centers on Congressional District 5, a sprawling North Florida district that was drawn in the past to help elect a Black member of Congress. DeSantis argued that continuing with such a district would involve racial gerrymandering and violate the Equal Protection Clause of the U.S. Constitution.

The Legislature approved DeSantis’ proposal to revamp the district, condensing it in the Jacksonville area. But Smith ruled that the plan violated a 2010 state constitutional amendment — known as the Fair Districts amendment — that barred diminishing the ability of minority voters to "elect representatives of their choice."

The overall redistricting plan passed by the Republican-controlled Legislature is expected to increase the number of GOP members of the state’s congressional delegation from 16 to 20, based on past voting patterns. District 5 is currently held by U.S. Rep. Al Lawson, a Black Democrat, but the revamped district likely would flip to Republicans.

Smith’s temporary injunction ordered use of a map that would keep the current sprawling shape of the district, which stretches from Jacksonville to west of Tallahassee. Using that map also would affect some other districts.

The state quickly appealed Smith’s temporary injunction, which led to an automatic stay on it. Smith lifted that automatic stay, but the appeals court Friday reimposed a stay.

"Based on a preliminary review, the court has determined there is a high likelihood that the temporary injunction is unlawful, because by awarding a preliminary remedy to the appellees (the plaintiffs) on their claim, the order ‘frustrated the status quo, rather than preserved it,’" the appeals court said, quoting a legal precedent.

The appeals court also cited the "exigency of the circumstances and the need for certainty and continuity as election season approaches."

But in the filing Monday at the Supreme Court, the plaintiffs also cited the approaching election season. A qualifying period for candidates will be held in mid-June, with primary elections Aug. 23.

"A remedial plan (the plan included in Smith’s temporary injunction) must likely be implemented within the next few weeks to ensure that the 2022 congressional elections proceed on time under a lawful districting plan," the filing said. "But resolution of the parties’ multiple appeals will make that deadline almost impossible to meet. Consequently, if petitioners (the plaintiffs) are to obtain relief, election administrators must continue preparing the remedial plan now to ensure their ability to effectuate any relief granted by this (Supreme) Court. The First District’s preliminary order reinstating the stay makes that impossible."

But attorneys for the state on Monday urged the appeals court to decline the certification request. In a nine-page filing, they said the plaintiffs’ "supposed need for an urgent resolution falls flat. The secretary (of state) has made clear since the inception of this case that it is already too late to provide any relief for the 2022 election cycle."