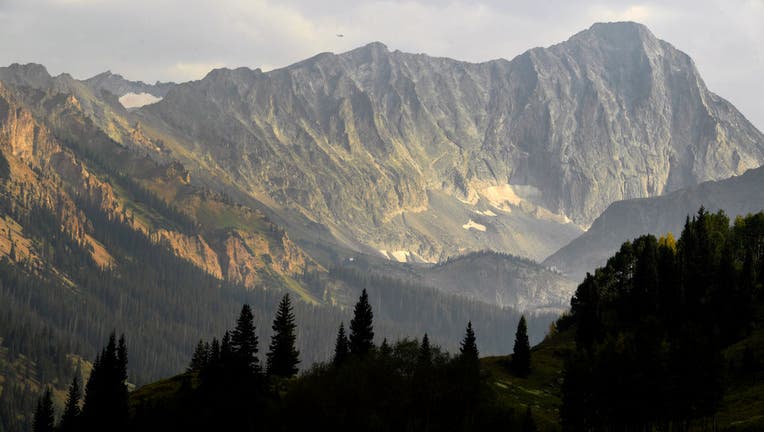 A National Guard Black Hawk helicopter searches for a stranded climber near the K2 summit on Capitol Peak on September 6, 2017 in the Maroon Bells-(Photo by Helen H. Richardson/The Denver Post via Getty Images)

A Colorado solo hiker died after she fell about 900 feet while climbing the treacherous Capitol Peak mountain on Saturday, authorities said.

First responders received a call just before 8 a.m. from a man who was part of a hiking party that saw the woman fall what he believed was 1,500 to 2,000 feet from below the summit into Pierre Lakes Basin, the Pitkin County Sheriff's Office said.

The witness said that the woman had fallen after a rock she was trying to hold onto gave way, according to the sheriff’s office.

Officials described the area as "treacherous," with "loose, rotting terrain" that can create unstable and dangerous conditions that can lead to serious injury or death.

Rescuers learned of the woman’s location and estimated she had fallen about 900 feet into Pierre Lakes Basin from the route that connects the knife edge to the Capitol Peak summit.

Her body was airlifted from the area after crews launched a recovery mission with 25 volunteers from Mountain Rescue Aspen, two Pitkin County Sheriff’s deputies and flight crews from Flight For Life Colorado, Montrose Helitack and EcoFlight.

The woman, who witnesses say was solo hiking, was from Denver, the sheriff’s office said. Her name was not immediately released pending the notification of her next of kin.

Capitol Peak is a mountain in the Maroon Bells-Snowmass Wilderness area approximately 14 miles west of Aspen, Colorado. It is a prominent summit in the Elk Mountains range of the Rocky Mountains.

Capitol Peak has an elevation of 14,137 feet and is considered one of the state’s most challenging mountains to climb due to its extreme conditions.