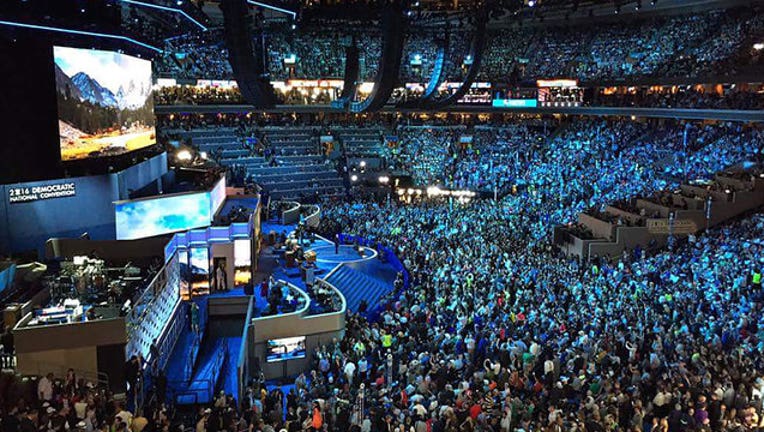 PHILADELPHIA (AP) - Taking her place in history, Hillary Clinton on Tuesday becomes the first woman to lead a major party toward the White House, a triumphant moment for Democrats to relish before plunging into a bruising general election against Republican Donald Trump.

After the roll call of states formalizing Clinton's nomination, former President Bill Clinton will take the stage for a history-making appearance of his own at the Democratic convention. Former presidents often vouch for their potential successors, but never before has that candidate also been a spouse

By night's end, the Clinton campaign hopes to have moved past the dissent that somewhat tarnished the convention's opening day. Supporters of Bernie Sanders, Clinton's primary rival, repeatedly interrupted Monday's proceedings with boos and chants of "Bernie."

Before Clinton's nomination became official, Sanders' supporters had one more opportunity to voice their fierce loyalty to the Vermont senator. Hawaii Rep. Tulsi Gabbard vowed that the movement Sanders' sparked "can never be stopped or defeated."

Sanders sat in the arena soaking in the cheers and waving to the crowd.

But the convention belonged to Clinton, who was bursting through the glass ceiling she was unable to crack during her failed 2008 campaign. She was nominated by a trio of Democrats, including Georgia Rep. John Lewis, who praised Clinton as a "great leader who can unite us as a nation and a people."

Clinton's campaign hopes the night of achievement, personal stories and praise can chip away at the deep distrust many voters, including some Democrats, have of the former secretary of state, senator and first lady. Much of the convention's second night will be devoted to introducing voters to Clinton anew, including three hours of speakers who will highlight issues she has championed for years, including health care and advocacy for children and families.

"Tonight we will make history, about 100 years in the making," said Karen Finney, a senior adviser for Clinton's campaign. "What we're really going to focus on tonight is telling that story, and telling her story, talking about the fights of her life."

The stories will be told by a long list of lawmakers, celebrities and advocates. Among those pledging support for Clinton will be the "mothers of the movement" — several black women whose children were victims of gun violence. Clinton has met privately with the mothers and held events with them, and they've become an emotional force for her campaign.

Sanders has implored his supporters to not protest during the convention, but he's struggled to control his energized backers. Several hundred people gathered at Philadelphia's City Hall under a blazing sun Tuesday chanting "Bernie or bust."

The morning after his rousing endorsement of Clinton at the convention, Sanders himself was booed as he arrived for a breakfast with California delegates.

"It is easy to boo," Sanders said in response. "But it is harder to look your kids in the face who would be living under a Donald Trump presidency."

Trump cheered the disruptions from the campaign trail. In North Carolina on Tuesday, he told a convention of the Veterans of Foreign Wars that, "our politicians have totally failed you."

When Trump mentioned Clinton's name, the group answered with shouts of "Lock her up!" an echo of the chants at last week's Republican convention.

Trump has been a frequent target at the Democratic gathering, where several videos featured his comments about women and the disabled, and tried to discredit the real estate mogul's business record.

First lady Michelle Obama was a star of opening night, making an impassioned case for Clinton as the only candidate in the presidential race worthy of being a role model for the nation's children. President Barack Obama and Vice President Joe Biden will speak Wednesday, along with Virginia Sen. Tim Kaine, Clinton's new running mate.

Bill Clinton has the spotlight Tuesday night. The former president has campaigned frequently for his wife during the White House race, but mostly in smaller cities and towns, part of an effort by the campaign to keep him in a more behind-the-scenes role.

During Hillary Clinton's first presidential campaign in 2008, her husband angered some Democrats with dismissive comments about Obama. He's had flashes of frustration this year, particularly when his own record on trade and law enforcement has been challenged by the party he once led, but has largely stuck to the campaign's messages.

The stakes for him are particularly high following his much-criticized decision to meet privately with Attorney General Loretta Lynch in the middle of the FBI's investigation into his wife's email use at the State Department.

The roll call this year, when each state announces its delegate totals from the primary season, will affirm a nomination Clinton locked up weeks ago.

It was unclear whether Sanders would interrupt the process to ask that Clinton's nomination be approved by acclamation. That's what she did on Obama's behalf in 2008 to indicate their rivalry was truly over.

Sanders suggested Tuesday he wouldn't rush to make that gesture early, mindful that cutting off his restive voters could cause an outcry.