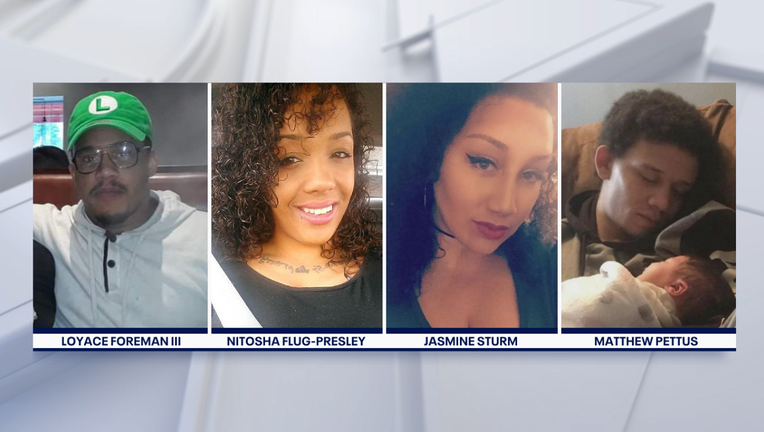 All four victims were found left in a corn field in rural Dunn County, Wisconsin.

(FOX 9) - An Arizona man has been charged in connection to the quadruple homicide in Wisconsin earlier this month.

According to the criminal complaint, on Sept. 12, a Mercedes SUV with four bodies inside was found by a farmer in a cornfield in Dunn County, Wisconsin.

When authorities arrived on scene, they discovered blood spatter in a rear wheel, leading them to believe the murders took place elsewhere, and that the bodies were transported to that location.

Video surveillance showed the SUV and a black Nissan Rogue, which was associated with Suggs’ mother, pulled into the parking lot of a gas station in Wheeler, Wisconsin around 12:08 p.m. The Nissan Rogue was being driven by Suggs’ father. His father is seen going into the store, purchasing items and walking to the Mercedes where he hands something to the driver through the window. Both vehicles then left in the direction of the cornfield. According to the complaint, investigators found blood evidence in the gas station parking lot where the Mercedes had been stopped.

Witnesses told police that Foreman, Pettus and Sturm hung out on the patio at Shamrock’s in St. Paul. Surveillance video later shows three of the victims leaving the bar around 1:26 a.m.

Following the news that two arrests have been made, they know who. Now, the family of Nitosha Presley wants to know why and how.

According to the complaint, an employee at another nearby bar told police that Sturm and Pettus came into the bar sometime after 1 a.m., possibly with Flug-Presley. The employee said they heard Flug-Presley arguing with a man later identified as Suggs. The man reportedly said something about having six children and this happening every time he comes back to Minnesota.

Another witness told police she saw Flug-Presley get into a black SUV with Pettus.

Surveillance video and data from Suggs’ cell phone shows that the Mercedes and Suggs returned to the area of the bar around 2:30 a.m. Phone data shows that Forman created a contact for Suggs and put his number into his phone around 3 a.m. The Mercedes then left at about 3:30 a.m. A short time later, surveillance video shows the Mercedes with Flug-Presley already slumped over in the front passenger seat.

According to the complaint, investigators believe Suggs killed the four victims in the area of 7th Street in St. Paul between 3:30 a.m. and 3:48 a.m.

At 4:30 a.m., Suggs called his father while he was near his father’s home. The call went unanswered.

Suggs’ father was arrested days later and agreed to speak with investigators. According to the complaint, his father said Suggs showed up where he spent the night and was with his mother, which he found odd. Suggs talked to them about taking care of his kids and trying to get along with each other. Suggs later asked his dad to follow him in his mom’s car.

A short time later, Suggs told his father that he "snapped" and shot a couple of people. He said the shooting happened in the vehicle. Suggs’ father then gave a Suggs a ride home after they left the Mercedes in the cornfield. Suggs’ father later denied knowing there were bodies in the Mercedes.

On Sept. 15, Dunn County charged Suggs with four counts of hiding a corpse.

On Sept. 17, Suggs turned himself in to Arizona authorities on the Wisconsin charges. He remains in custody in Arizona.