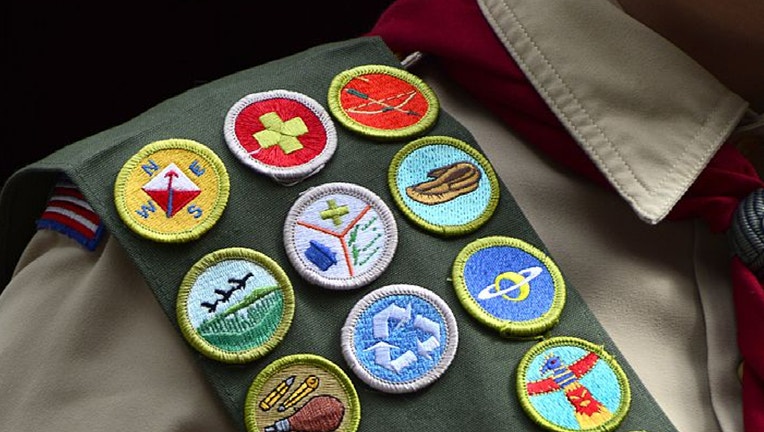 The merit badge sash is worn by a Boy Scout during formal activities and events and not during Troop meetings or campouts. (Photo by Robert Alexander/Getty Images)

LAKE MARY, Fla. - A high-ranking official with the Boy Scouts of America Central Florida Council is accused of the sexual battery of a child.

"Because of the role he held in the community, detectives believe there could be more victims," said a spokesperson with the Sheriff's Office.

According to an arrest report, three juveniles told detectives that they were touched inappropriately by Larsen.

One victim informed his mother that, "Larsen has been touching him and performing sexual acts on him since he was approximately eight years old," the report states.  Another child stated that he had been touched "multiple times by Larsen while he was at Larsen's residence," according to the report.  A third child said he too has been a victim of inappropriate contact by Larsen since he was eight years old.

"The actions alleged to have been committed by John Larsen are reprehensible and opposed to everything for which the Boy Scouts of America (BSA) stands," read a statement sent to FOX 35 News by Eric Magendantz, CEO of the Central Florida Council of the Boy Scouts of America.  "Upon learning of these allegations and his arrest, we took immediate action to prohibit him from participation in Scouting. We added Mr. Larsen to the BSA’s Volunteer Screening Database which prevents him from any future registration and participation in Scouting, including employment."

Magendantz explained that adult leaders and employees all undergo a screening process that includes criminal background checks.  In addition, he said there is mandatory youth protection training for all volunteers and employees; a leadership policy that requires at least two youth-protection trained adults be present with youth at all times during Scouting activities and bans any one-on-one situations where adults would have any interaction alone with children — either in person, online, or via phone or text.

Lastly, Magendantz said there is a ban on the use of recording devices/cell phones near bathrooms and shower houses and that prompt reporting of any allegation or suspicion of abuse to law enforcement is mandatory.