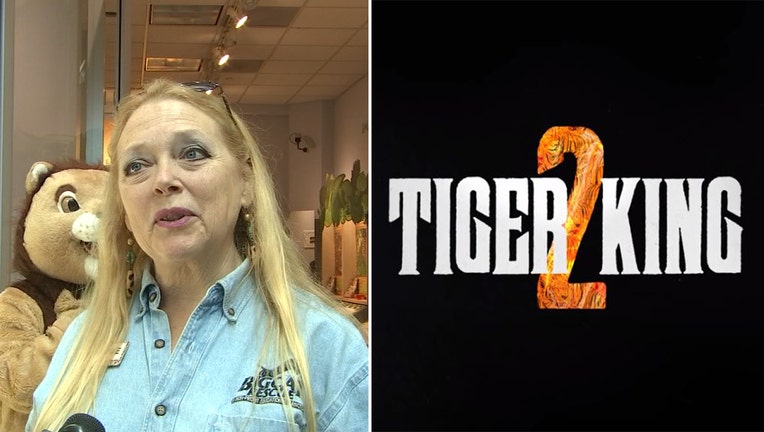 TAMPA, Fla. - Carole Baskin has filed a lawsuit against Netflix, claiming that footage was used for ‘Tiger King 2’ without her consent.

According to the suit, filed in Tampa on Monday, Baskin, the CEO of Big Cat Rescue, only signed release forms for season one of the show and didn’t want to participate in the sequel. Her legal team is calling for Netflix to remove all footage of her from the second season before it airs.

The lawsuit was filed against Netflix and the production company, Royal Goode Productions. In the document, it states Carole and her husband, Howard, were surprised to see footage of themselves in the trailer.

The Baskins said if the footage is not removed, they will seek to take the case in front of a jury. After the first season was released, Carole said she was "disappointed" in the docuseries, calling it "sensational."

The new season is expected to give an update on the search for Baskin’s missing ex-husband, Don Lewis. He has now been missing for over 20 years.

Lewis disappeared a day before a planned trip to Costa Rica back in 1997. His van was found at a Pasco County airport, but Lewis was never seen or heard from again. He was legally declared dead in 2002, but since Tiger King’s debut, Hillsborough County Sheriff Chad Chronister has re-opened the investigation into his disappearance. The sheriff said that while he doesn’t have any suspects, he too believes Lewis could have been murdered.

During the Tiger King episode focused on Lewis’s disappearance, there were many theories about what happened to Lewis. His own family even admitted that they believe Baskin may have had something to do with his disappearance.

This Warren Elly report originally aired on WTVT in August of 1997, one week after Wildlife on Easy Street sanctuary founder Don Lewis vanished. He was never seen again. The story includes interviews with those who knew him, including his wife, now known as Carole Baskin. The case later gained notoriety after being featured in the Netflix documentary 'Tiger King: Murder, Mayhem and Madness.'

In 2011, the sheriff says Baskin was offered a lie detector test, but she refused to participate. However, she has never been charged in relation to the case.

Baskin's husband, Howard, who appears with his wife in the docuseries, says he has never questioned whether Carole was involved in Lewis' disappearance.

"There was no way she had any involvement in his disappearance," said Howard Baskin.

The CEO of Big Cat Rescue recorded audio while a witness described one of the cats attacking a volunteer.

In the first season, the documentary highlighted the rivalry between Baskin and Joseph Maldonado-Passage, who goes by "Joe Exotic." He was the previous owner of Greater Wynnewood Exotic Animal Park in Oklahoma.

In January 2020, Joseph was sentenced to 22 years in federal prison for the 2017 murder-for-hire plot against her -- as well as animal abuses.

Baskin openly criticized Joe's treatment of animals. "Tiger King" followed Joe's story and other eccentric characters who own exotic animals, but focuses on the foiled murder plot. According to the U.S. Attorney's Office, he approached at least two people to find someone to kill Baskin in exchange for money.