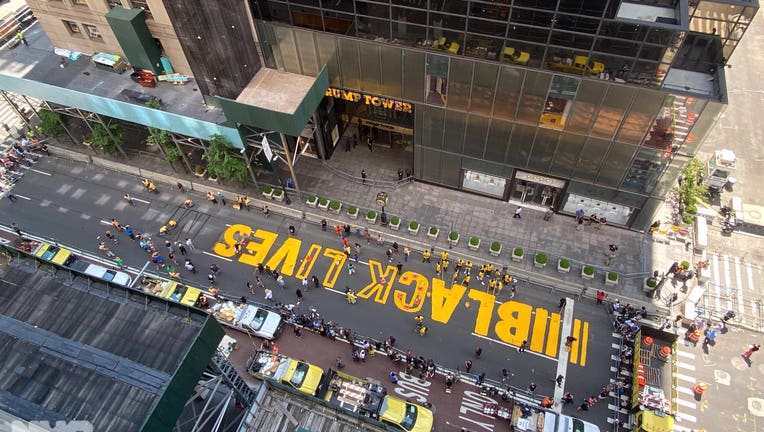 Redwood City in San Francisco’s Bay Area quietly scrubbed away its Black Lives Matter mural from a city street after a resident asked to paint a similar “MAGA 2020” on the same road, according to a local news report.

Redwood City resident Dan Pease received permission from city officials to paint “Black Lives Matter” on Broadway Street as part of a Fourth of July public art celebration, according to KPIX 5. City officials even supplied him with the yellow poster paint to make the mural.

“Because we were using the poster board paint that would eventually deteriorate over time, my understanding from them was that the mural would last as long as the paint lasted,” Pease explained, the outlet said.

Then, local real estate attorney Maria Rutenberg, who reasoned that the street was now a public forum, asked the city if she could paint her own “MAGA 2020” sign on the same street.

“I saw 'Black Lives Matter' sign appearing on Broadway Street on the asphalt and I figured that’s gonna be a new public space, open for discussion, and I wanted to get my message out, too,” Rutenburg said.

The city did not respond but promptly removed the Black Lives Matter mural, the news outlet said. They said the sign was a traffic hazard and might cause accidents.

Pease said he doesn’t believe “Black Lives Matter” to be a political statement but understands the position the city was in, according to KPIX 5.

“I have no hard feelings to the city council,” Pease said. “I am disappointed but, at the same time, I am very grateful that they allowed me to put that message on Broadway.”

In light of recent protests, a number of cities have not only allowed residents to paint their own Black Lives Matter mural but even commissioned the painting of the public message on city streets.

In New York City, Mayor Bill de Blasio commissioned a Black Lives Matter mural outside Trump Tower on Fifth Avenue. That mural has been defaced three times this week, first by an unknown suspect who threw red paint on the message and second by four who threw blue paint on the mural and were later arrested.

The third time, a Black woman got into an altercation with police who were trying to hold her back as she dumped black paint on the mural. “Refund the police!” she could be heard shouting.

In D.C., Mayor Muriel Bowser allowed the Black Lives Matter message to be painted on a road leading to the White House before “Defund The Police” was added by protesters.

Conservative watchdog group Judicial Watch asked Bowser and D.C. Attorney General Karl Racine for permission to paint “Because No One is Above the Law!” on a Capitol Hill street.

“Mayor Bowser made a decision to turn D.C. streets into a forum for public expression. Judicial Watch seeks equal access to use this new forum to educate Americans by painting our organization’s motto and motivation, ‘Because No One Is Above the Law!,’ on a Capitol Hill street,” Judicial Watch President Tom Fitton said in a statement. The group later sued over viewpoint discrimination.