"I feel humbled and overwhelmed by the margin of victory," Dyer told FOX 35's Robert Guaderrama. "I thank the voters of Orlando for having the trust and confidence to give me another four years."

The mayor said he felt humbled and overwhelmed by the margin of his victory. He also thanked voters for putting their trust and confidence in him for another term.

Addressing key agenda items for his next term, Dyer stressed that he will press for more affordable housing and transportation initiatives with Orange County Mayor Jerry Demings.

"We're going to continue a lot of the things we're doing -- working on affordable housing, homeless issues, finishing the [Dr. Phillips Performing Arts] Center. Working on Deming's transportation initiative. A lot of work yet to be done."

“I just think he’s doing a phenomenal job, and I think his victory tonight has just sent a resounding from the citizens of Orlando, that they want to give him another four more years,” said Rep. Val Demings, D-Orlando.

“The Mayor has a proven record of being a leader, a visionary, someone who has always been the tip of the spear when it comes to the Central Florida community,” said Orlando Police Chief Orlando Rolon. 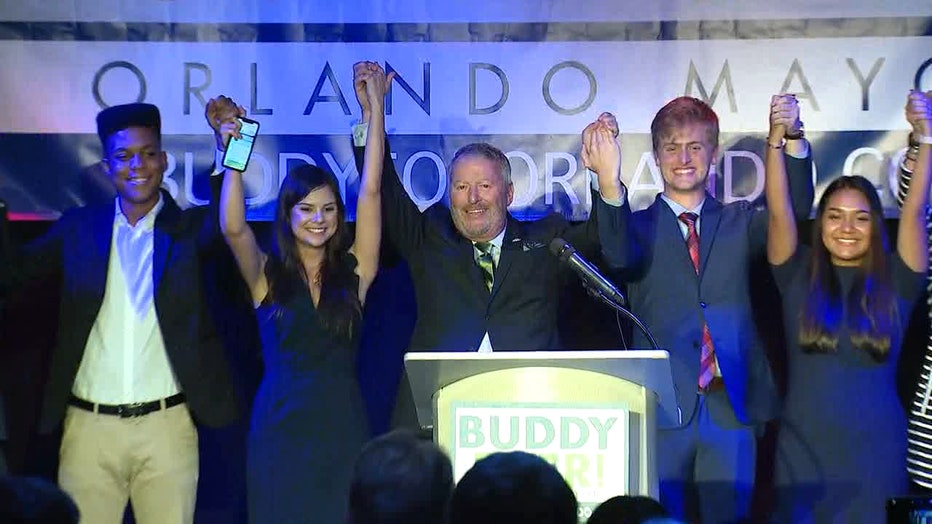 The three candidates had spoken out about a variety of hot topics during the campaign, from raising the minimum wage to taxes. Dyer was the lone mayoral candidate to support the transportation sales tax increase that Mayor Demings is proposing for the 2020 ballot.

Voter turnout was significantly low. Less than 23,000 ballots were cast, representing about 13 percent of all registered voters in Orlando.