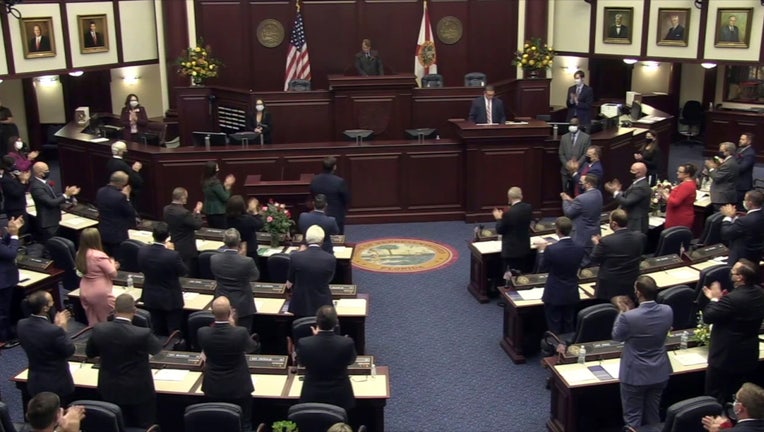 TALLAHASSEE, Fla. - A Senate panel on Tuesday scaled back a bill that would have reduced Bright Futures scholarships for students pursuing certain degrees, but opponents are now focusing criticism on whether the measure will jeopardize future funding for the program.

The measure (SB 86), sponsored by Sen. Dennis Baxley, R-Ocala, drew a massive outcry in recent weeks because it would have reduced or even eliminated Bright Futures scholarships for students seeking degrees deemed unlikely to lead to jobs.

But Baxley filed an amendment to delete that part of the bill, with the Senate Education Appropriations Subcommittee approving the change Tuesday. The Republican-controlled panel then voted 6-3 along party lines to advance the remaining bill.

"I got well over 2,000 communications regarding this bill, so this is a very popular bill," Baxley said of the controversial proposal, eliciting laughs from some lawmakers on the panel.

After the outcry that included a student-led opposition campaign, most controversial parts of the bill have been eliminated. But Baxley said Tuesday the proposal will still be a step in the right direction of bridging the gap between higher education and the workforce.

"This strike-all (amendment) is a result of that ongoing dialogue that we’ve had with senators and constituents. The bill shifts the focus to providing information so that students can make an informed decision about their programs of study," Baxley told the panel.

Under Baxley’s amendment, the state university system’s Board of Governors, the State Board of Education and Independent Colleges and Universities of Florida would craft and publish lists of degrees they deem not likely to lead to employment. However, the lists would have no bearing on the awarding of Bright Futures scholarships and Benacquisto Scholarships for National Merit scholars.

Some Democratic lawmakers took issue with creating such lists, and a proposed amendment to remove that provision from the bill failed.

"I characterize this as a steering bill. It tries to steer students towards decisions based on (something) other than what they have in mind of what they want their major to be," said Sen. Audrey Gibson, D-Jacksonville.

Critics also had been troubled by part of the bill that sought to reduce the amount of credit hours covered by Bright Futures for students who took "accelerated credits" in high school, like dual-enrollment or Advanced Placement courses. That part of the bill also was removed in Baxley’s amendment Tuesday.

But even with the changes, Democrats argued that one remaining part of the bill would threaten scholarship amounts for future recipients in years when the state budget is tight.

That part of the bill would change the current system of providing Bright Futures aid at either 75 percent or 100 percent of tuition and fees to tying scholarship levels to the amount of money appropriated in the state budget.

"To subject our children and their education, their futures, to the appropriations process by tying their award to the (General Appropriations Act) is unfair. How can we expect lifelong decisions to be made when the state is essentially saying, ‘We won’t commit to fully funding the scholarship programs?’" said Sen. Janet Cruz, a Tampa Democrat who filed a failed amendment seeking to strike that part of the bill.

The funding issue also has become the centerpiece of some students’ arguments against the bill.

"With such vital funding being held in such uncertainty, this bill still affects the future plans of hundreds of thousands of Florida students. Currently, it requires legislative action in order for funding to change. With these changes, the amount students are funded could change every year in the (budget)," said Heesu Seo, a high school junior from Tallahassee who spoke against the bill Tuesday.

Seo is part of the student-led group Save Bright Futures, which was formed in response to the bill.

Baxley tried to stave off criticism of the measure by saying it would provide flexibility for future legislatures.

"There are very unrealistic expectations about any of this stuff being forever when we cannot bind future legislatures. This may be an organism that changes, somewhat, over time," Baxley said.

Baxley also argued that tying scholarship amounts to the program’s appropriation in the state budget "leaves the potential open to increase the provision if it’s needed."

"Nothing is guaranteed in this world. We don’t know what we are up against until we are there," Baxley said.

Some Republicans on the panel defended Baxley’s proposal as having the potential to inform prospective students about fields of study that could benefit them in careers. Under the measure, the university system’s Board of Governors would be required to publish an online dashboard featuring data on graduates of various fields of study, including post-graduation median salaries and student loan debts.

"I think the dashboard is transformational in terms of putting that in the students’ hands, the parents’ hands, the guidance counselors’ hands --- anybody that wants to look at it, I think having that data there is going to be wonderful for our kids when they make these decisions," said Sen. Travis Hutson, R-St. Augustine.

"What we’re talking about with the General Appropriations Act is going forward, these sixth-graders or seventh-graders, can we make that same guarantee to them. It’s new students. And that’s something that’s going to be talked about at a budget-time process when the GAA comes out," Hutson said.

A House version of the bill has not been filed.