FBI Tampa Division Special Agent in Charge Michael McPherson says human remains and items related to Brian Laundrie have been found in the Myakkahatchee Creek Environmental Park, in an area that was previously underwater.

NORTH PORT, Fla. - The attorney for the family of Brian Laundrie has chalked up differences in the timeline of when the Florida fugitive was reported missing to a lack of communication between law enforcement agencies and tells Fox News Digital there is "no discrepancy between the FBI and the Laundries."

Steven Bertolino represents Chris and Roberta Laundrie and their son, Brian, who is a person of interest in the murder of his fiancée, Gabby Petito. Brian is also wanted on separate charges of unauthorized use of her bank card.

Bertolino spoke with Fox News Digital by phone Thursday, and he explained that he personally notified the FBI immediately that Brian never returned home from his hike of Myakkahatchee Creek Environmental Park on Sept. 13.

Spokespersons for the FBI’s Tampa and Denver field offices did not respond to Fox News Digital’s requests for a response to this new revelation Thursday morning.

Speaking to reporters during a related press conference on Sept. 16, North Port Police Chief Todd Garrison was asked if he knew where Laundrie was at that moment. "Yes," Garrison responded.

The FBI and Sarasota County Medical Examiner's Office are among those who were on the scene at the Myakkahatchee Creek Environmental Park in North Port, working to identify human remains spotted in an area that was previously underwater.

But during Thursday’s interview with Fox News Digital, Bertolino explained the confusion in Garrison’s defense.

"There was never any communication between myself and law enforcement in the next three days. They never asked me, and I never informed them that Brian didn't come home," Bertolino explained, adding "North Port PD was under the assumption that Brian was home".

Confusion grew further when, on Sept. 17, authorities told Bertolino and the Laundries that they received a tip that Brian was in Tampa.

"They wanted to meet with us on Friday. I was shocked and said, 'That's good. You found him in Tampa,' and they said, 'What do you mean? I thought he's at the house,’" Bertolino recalled.  "I said, 'No, I told you the other day he never came home.' And that's how it played out."

He continued: "Once we clarified exactly what happened, it was a series of just, I don't want to say miscommunication, but more, no communication."

Josh Taylor, a spokesperson for North Port Police Department (NPPD), struck back in an email to Fox News Digital Thursday that in "no way was any of the NPPD’s actions, comments, or reporting reflective of the NPPD having information that Brian Laundrie was missing on that Monday the 13th."

"Please keep in mind that NPPD was an assisting agency until Tuesday night September 14th," he wrote. "I’m confident that if that were true, the information would have been relayed."

EXCLUSIVE: BRIAN LAUNDRIE'S PARENTS INSIDE FLORIDA PARK AS POLICE SUGGEST 'WE MIGHT HAVE FOUND SOMETHING'

Taylor noted that NPPD was "pressing hard" for information from the family at the time, even addressing Bertolino in a public tweet on Sept. 15 asking for his help in coordinating a conversation with Laundrie.

"No response was given in any form," Taylor said Thursday. "Our door to getting info, including Brian being potentially missing, was wide open."

He reiterated that the police department was not notified about Brian's possible disappearance until that Friday, Sept. 17.

"I was in the room when it happened," Taylor continued. "The FBI called and informed us that the family now believed he was missing since Tuesday and we needed to head over to the home to begin a missing person investigation. Remember, they later changed that story to Monday."

He emphasized that police were "working with the best intelligence on what we thought at the time, working with a family who refused to cooperate in the investigation." 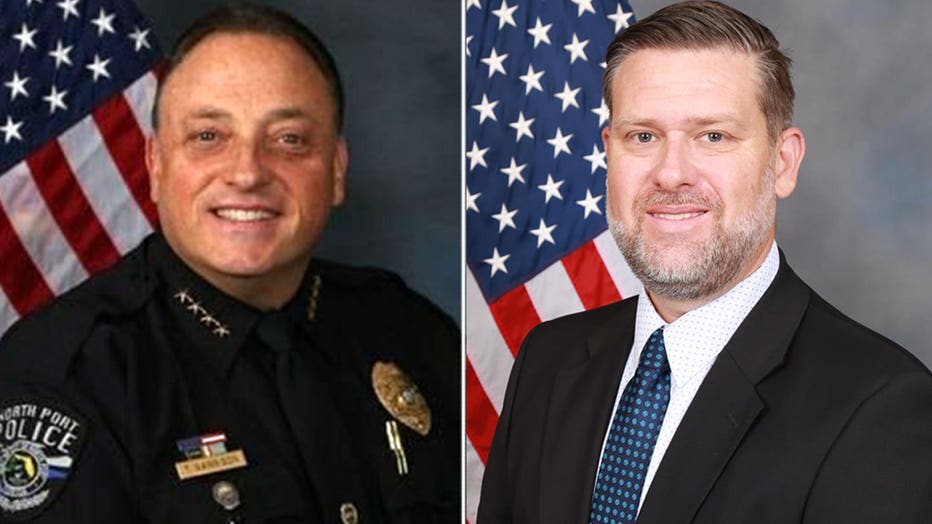 Petito's family also seemed to be in the dark that Friday, Sept. 17.  Her stepfather, Jim Schmidt, was visibly shaken during a television interview when Taylor revealed Laundrie's parents were now claiming they last saw Brian on Tuesday.

On Wednesday, the FBI confirmed to reporters that investigators found what appear to be human remains, "along with personal items, such as a backpack and notebook belonging to Brian Laundrie," just hours after Laundrie's parents searched the Myakkahatchee Creek Environmental Park.

"These items were found in an area that, up until recently, had been underwater. Our evidence response team is on scene using all available forensic resources to process the area," said Michael McPherson, special agent in charge of the FBI's Tampa division. "It's likely the team will be on scene for several days."

Officials have not yet said whether the remains are Laundrie’s.

Since Laundrie's disappearance, state, local, county and federal law enforcement have extensively searched the reserve and the Myakkahatchee, where Laundrie is said to have parked his car at the time.

Attorney: Brian Laundrie's parents at site where remains were found

"Chris and Roberta Laundrie were at the reserve earlier today when human remains and some of Brian’s possessions were located in an area where they had initially advised law enforcement that Brian may be. Chris and Roberta will wait for the forensic identification of the human remains before making any additional comments," the statement from attorney Steven Bertolino said.

Laundrie and 22-year-old Petito left for a trip in mid-June with the plan to visit national parks in her white converted Ford Transit. The couple had met years earlier on Long Island, New York, where they grew up, and later moved into the North Port home with Brian’s parents.

Brian Laundrie returned home to North Port on Sept. 1 — with the van, but without Petito.

Petito’s mother, Nichole Schmidt, reported her missing to Suffolk County Police in New York on Sept. 11. Search teams discovered Petito’s body near Wyoming's Grand Teton National Park on Sept. 19 and announced shortly thereafter that she had been the victim of a homicide.