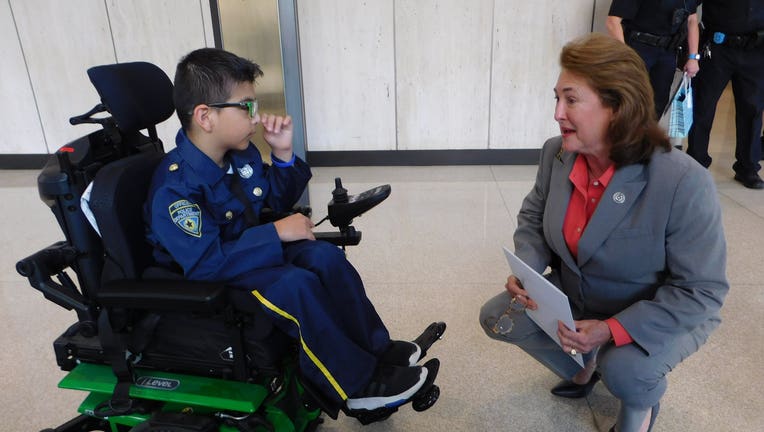 HARRIS COUNTY, Texas - A Houston-area third-grader, who was bullied and pushed out of his wheelchair for dressing as a police officer for Career Day, is now an honorary member of multiple departments.

Michael Martinez, 8, has cerebral palsy and wants to become a police officer, now has the titles to prove it: Honorary District Attorney's Investigator, Honorary Deputy Constable, and Junior firefighter.

"Honorary badges are given to recipients who embody the characteristics required of every peace officer and first responder: courage, strength, kindness and resilience," Ogg said at the ceremony held at the District Attorney’s Office. "We are presenting these honorary titles to this young man who, although not of age to be a peace officer, has taught us all about how to be brave in the face of adversity."

Michael, who attends third grade in Humble, had donned a police officer costume for Career Day at school when a couple of older students, who have since been punished, pushed him out of his wheelchair in a congested hallway. Michael kept his cool and stayed calm as several students helped him back into his chair.

Boy who was bullied gets escorted by police to school

One boy who was bullied at school on career day for wearing a police uniform got a pretty awesome escort to school.

Undeterred by the bullies, the next day Michael again dressed for the job he wants – and headed back to school. This time he rode in the front passenger seat of a deputy constable’s car with others escorting him.