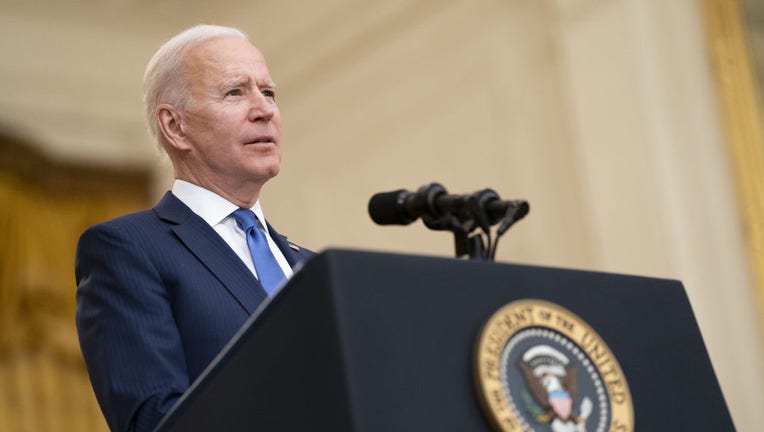 FILE IMAGE - President Joe Biden speaks during an event in the State Dining Room of the White House in Washington, D.C., U.S., on March 8, 2021. Photographer: Kevin Dietsch/UPI/Bloomberg via Getty Images

Biden announced his intentions on International Women's Day, which is set aside to celebrate the social, economic, cultural and political achievements of women around the world.

He said everyone deserves to live up to their "God-given" potential, regardless of gender, and that societies perform better when women and girls are allowed to prosper.

"Ensuring that every woman and girl has that chance isn’t just the right thing to do — it’s also a strategic imperative that advances the prosperity, stability, and security of our nation and the world," the president said in a written statement.

The White House also was hosting a livestreamed International Women's Day event Tuesday to discuss the announcement, featuring Secretary of State Antony Blinken from Europe, acting budget director Shalanda Young, U.S. Agency for International Development Administrator Samantha Power and Jen Klein, director of the Gender Policy Council. They are to be joined by young women leaders from Ukraine, Brazil, Zambia, Burma, Jordan and the United States. Biden was not scheduled to participate.

Hear from some of the network's biggest female stars about what inspires them.

Jill Biden marked International Women's Day with a video tribute to women throughout the world "who courageously use their voice, no matter the cost."

"To our sisters from Ukraine who are fighting to keep their country free and their families alive: We stand with you in solidarity," the first lady said. "To our sisters in Russia who are protesting and speaking out against the invasion at great personal risk: We see your courage," she added.

"And to women warriors around the world, those fighting for justice and working for change: Thank you for building a better future for all of us," said the first lady, who is visiting Arizona.

Biden's $2.6 billion funding request will be included in his federal budget proposal for fiscal year 2023, which starts Oct. 1.

Biden sought $1.2 billion for gender equality programs in his 2022 budget proposal. The numbers haven't been finalized since Congress is still working on the budget.

The White House has not said when Biden will send his 2023 spending proposal to Congress.