ORLANDO, Fla. - FOX 35 News got a behind-the-scenes look Tuesday at the newest ride at SeaWorld Orlando. The roller coaster is called Ice Breaker and is expected to open later this year.

It may be called Ice Breaker, but an up-close look from the construction site confirms this coaster brings the heat.

"We have the steepest drop on a coaster in Florida, 100 degrees," said Vice President of Design and Engineering Brian Andrelczyk.

"It's very force heavy so we needed to make sure we worked through that from an engineering standpoint," he said.

The ride features four launches, pushing you backward, forward, backward and forward again, maxing out at 52 miles an hour. Engineers say it'll have you hopping in your seat. 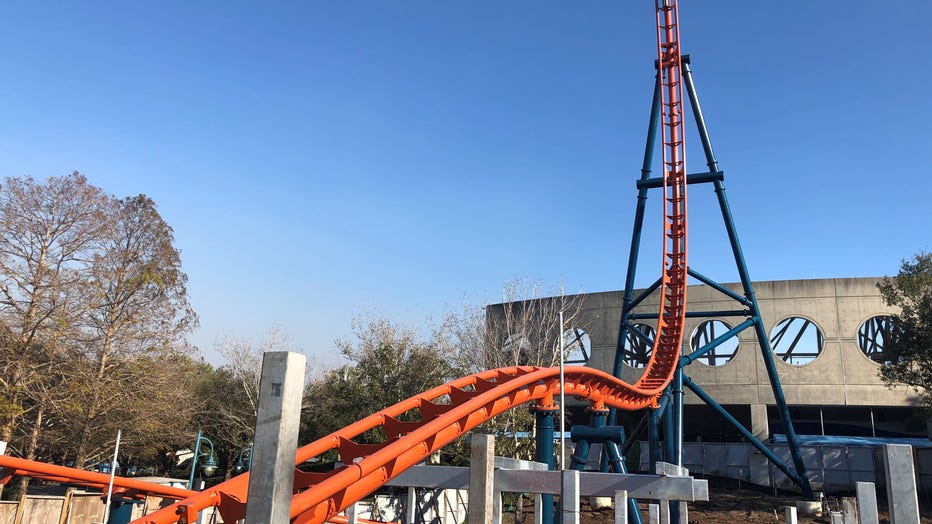 "Then through a whole series of low-to-the-ground, high-bank twist turns, airtime hills, a lot of exciting moments before you hit the breaks," Andrelczyk said.

It's a total of 90 seconds of thrills.  The ride changes from the lowest part up to 80 feet, and that isn't even the tallest part. Another area hits 93 feet high. One of the more unique components of the ride isn't even on the ride itself, it's the queue.

"The pathways, in general, get really close to and even underneath of the roller coaster so you'll be able to get really interesting and unique views, whether you’re on the ride or not," Andrelczyk said.

Ice Breaker matches the theme of the arctic part of the park. Engineers call it a "moderate" thrill ride.

"It’s not so much that it’s going to scare off the younger folks," Andrelczyk said.

Engineers hope the Ice Breaker will still give you the chills when it opens this spring.  An exact opening date has not been announced.