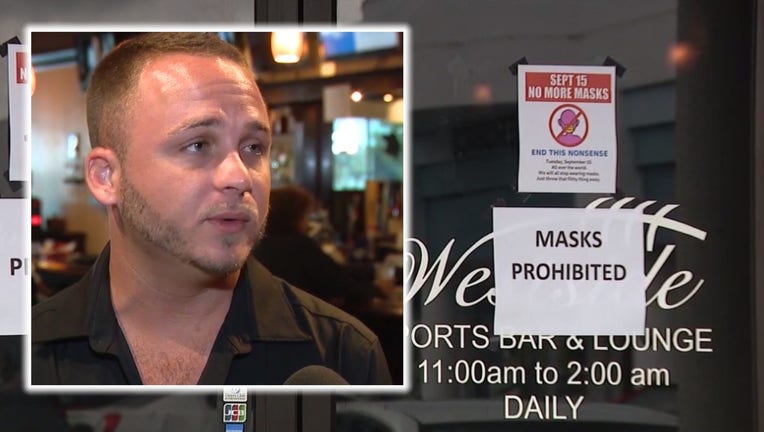 LAKE MARY, Fla. - A Florida bar owner who made headlines last fall for banning masks while also threatening to eject patrons who wore face coverings is once again steeped in controversy.

Gary Kirby, the owner of Westside Sports Bar and Lounge in West Melbourne, is accused of holding a male revue after undercover law enforcement officers said his establishment was in violation of the city's adult entertainment code.

According to the arrest report, Kirby has three prior failures to appear before a judge. He was taken into custody and transported to the West Melbourne Police Department for questioning.

Kirby waived his Miranda rights, according to an arrest affidavit. The report states that when questioned about the alleged strip show, he "advised he knew it was wrong" and "further stated he has done three prior shows and almost canceled this one."

Bar not allowing people to wear masks inside

A bar in West Melbourne says no masks are allowed but temperature checks are still being conducted before a patron can enter.

In September, Kirby told Fox News that he had received death threats for prohibiting masks at his establishment but claimed that his patrons were mostly supportive.

"I personally don’t agree with it. So that’s why I made the decision to…I don’t want them here," added Kirby in a previous interview with FOX 35 News.

Kirby also said face coverings make it harder for his bartenders to identify if a patron has been overserved alcohol. He also alleges that his bar was burglarized after operating hours one evening in August of last year by a man in a surgical mask.

Kirby has said that patrons of his establishment are still required to undergo a temperature check before entering.