What is 5G wireless technology?

5G is a new technical standard for wireless networks that promises faster speeds and less lag.

With the implementation of the newest generation of wireless service — known as 5G — AT&T and other telecom companies are also moving to shut down old networks in an effort to free up bandwidth for newer, and potentially more profitable, services.

The years-in-the-works process has also prompted calls for a delay because many products still rely on the old 3G standard. The home-alarm industry has asked the Federal Communications Commission to delay AT&T's network shutdown until December.

The FCC is monitoring the 3G phase-out and working to "implement safeguards" for older phones and other devices, spokesperson Paloma Perez said last week.

Here’s what you need to know and what devices could be affected:

AT&T is set to shut down its 3G network on Tuesday, Feb. 22. The carrier first launched the network in the U.S. in 2004 and later that decade it was the exclusive carrier for early iPhones — helping to usher in the first phase of the smartphone era.

The networks we currently rely on for video streaming, social apps, Uber and other must-haves of the modern era mostly use the subsequent 4G standard.

For AT&T and other carriers, shutting down 3G is an efficiency move. As they upgrade to the latest technology, they shut off outdated networks and use the freed-up bandwidth for newer — and what they hope will be more profitable — services. 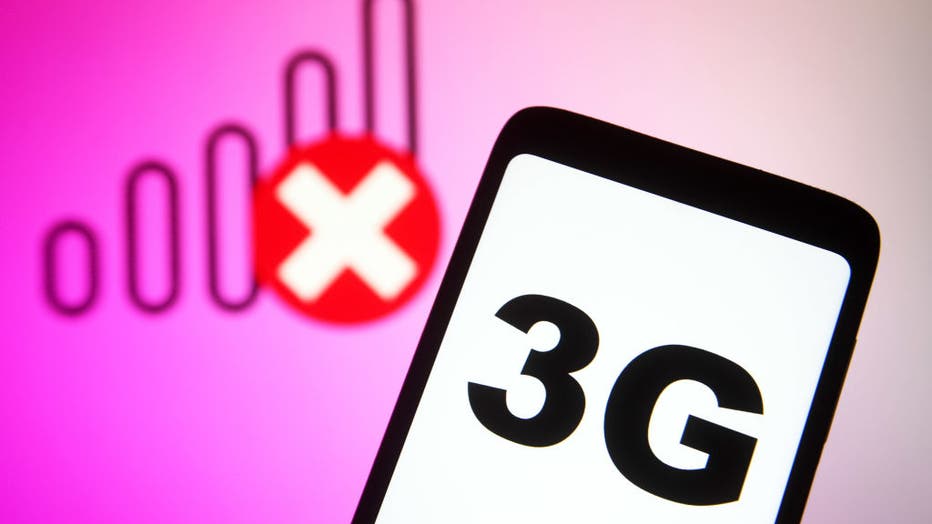 FILE - In this photo illustration, a 3G sign is seen on a smartphone screen, and no signal icon in the background. (Photo Illustration by Pavlo Gonchar/SOPA Images/LightRocket via Getty Images)

Industry groups have raised concerns about other products that will need to be replaced or updated, which could include everything from home fire alarms to ankle bracelets used by law enforcement. It's not certain how many outdated products are out there, or how big a deal it would be if updates take place after Feb. 22.

The alarm industry and other companies say they have had issues replacing devices even though they've known about the coming shutdown for years. Recent setbacks include both pandemic-triggered supply-chain issues and customers hesitant to let technicians into their homes during the pandemic.

AT&T says that delaying the shutdown would hurt its 5G rollout, degrading its customers' ability to use their service and causing more dropped calls.

The company argues that the alarm companies have had years to upgrade their customers' devices. The company also says the FCC doesn't have the authority to stop its shutdown.

Verizon, set to follow at the end of 2022, has already pushed back its shutdown — twice — from an original target date in 2019, saying customers needed more time to update their devices. T-Mobile has also delayed the shutdown of the Sprint 3G network it acquired in 2020, to the end of March; it'll shut down the T-Mobile 3G network by July 1.

Is my phone 3G or 4G? What about other products in my home?

AT&T has published a detailed list of phones and digital devices that will still work after their 3G switch off on Feb. 22, as well as devices that may require a software update to enable HD voice, Wi-Fi Calling, Video Call, Advanced Messaging or 5G services. Company officials say people will need to check their phone model in order to precisely determine if their phones will work after the switch off or not.

AT&T users can also sign into their accounts to see if their phones will be affected.

People with older phones that aren't compatible with 4G will have to upgrade, and once 3G shuts down, those phones won't work for calls or texting.

AT&T says it has reached out to offer its customers free replacements via letters, emails and texts. Spokesperson Jim Greer said fewer than 1% of AT&T's consumer devices, including phones, tablets and watches, will lose cellular service, but declined to say how many devices that is.

The company reported about 196 million phones and connected devices using its network in the most recent quarter.

Customers should also call the companies that make or service burglar and fire alarms and personal medical alert systems to see if any need an update. If so, officials say to schedule a service visit immediately or get a new device shipped.

How many outdated products are out there?

While it’s not really clear, an alarm-industry lobbying group estimates that 1.5 million customers still need to upgrade their fire or burglar alarms.

While an unnetworked fire alarm will still sound an alarm if there's smoke, it won't be able to contact the fire department. Likewise, burglar alarms won't route to emergency responders if triggered.

But not all providers say there's an issue. ADT said in November that it was on track to update its AT&T customers by February.

AARP, the advocacy group for adults over 50, is also concerned that users of medical alert systems — those necklaces and bracelets, like Life Alert — that connect users to emergency call centers won't know their gadgets don't work anymore or won't be able to replace them in time.

"If your device is pre-2019 and is operating on 2G or 3G networks, it is wise to upgrade your device as soon as possible," read a portion of AARP's article on the 3G shutoff.

One manufacturer of ankle bracelets for people on probation, parole, or pre-trial release said it hasn't been able to update many 3G-reliant devices. A premature shutdown could potentially allow tens of thousands of offenders like child abusers, sex offenders and drunk drivers to go unmonitored while out of prison, Alcohol Monitoring Systems wrote in an August FCC filing. The company did not respond to questions from the Associated Press.

Zonar, which provides GPS and other services for buses and trucks, says tens of thousands of vehicles will be affected. Trucks that aren't upgraded may have to be idled if drivers can't electronically log their hours as federal rules require. Zonar has a workaround for the trucking industry, but not all customers have placed orders for it, said Susan Corscadden, a company marketing executive.

Affected school districts could also lose their ability to track the location of school buses, while their drivers may not be able to use GPS systems for directions. The National Association for Pupil Transportation seconded these concerns in a September filing, although Noelle Ellerson Ng, the group's legislative liaison, said in an interview that she hasn't heard school superintendents raise the issue.

"There’s a lot of uncertainty about the impact and about how many people are affected," Tom Kamber, the executive director of Older Adults Technology Services, a nonprofit affiliated with AARP, told the AP last week.

The AARP had asked the FCC to delay the AT&T shutdown until December.