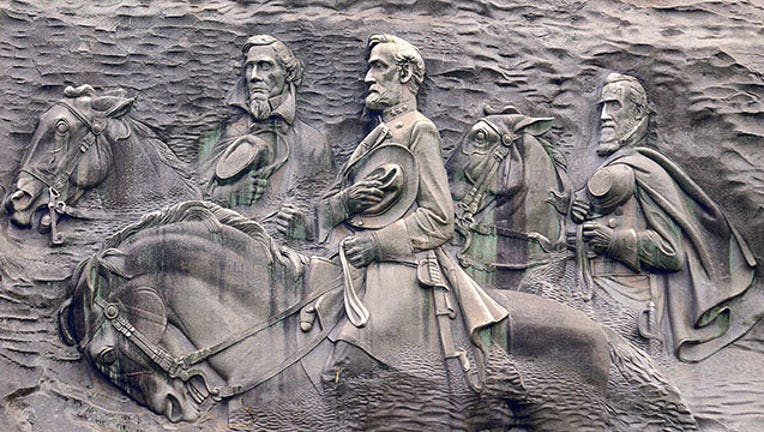 A sculpture in Georgia larger than a football field – depicting Civil War luminaries Jefferson Davis, Robert E. Lee and Thomas "Stonewall" Jackson – has become the latest target in the push to purge the South of signs of the Confederacy.

The Atlanta chapter of the NAACP called Monday for the elimination of all symbols of the Confederacy from Stone Mountain Park, whose marquee attraction is the 90-foot-high, 190-foot-wide sculpture carved deep into the mountain.

"Those guys need to go,” chapter leader Richard Rose told WSB-TV, referring to Davis, the former president of the Confederate States of America, and the two Confederate generals. “They can be sand-blasted off, or somebody could carefully remove a slab of that and auction it off to the highest bidder.

"My tax dollars should not be used to commemorate slavery,” he added.

In addition to the removal of Confederate symbols from Stone Mountain Park, located outside of Atlanta, the group says it also wants all symbols removed from state-owned buildings, parks and lands.

A spokesman for the park told WSB-TV that any removal of the monuments is up to the Georgia state legislature.

Rep. Hank Johnson, D-Ga., who serves the district in which the mountain sits, told local radio station V-103 that he is “not so much affected by Stone Mountain Park as I am by the flag flying at an official government building like a state capitol or even the federal Capitol, a position, the seat of government.”

The push from the NAACP comes on the heels of the removal of the Confederate battle flag from the South Carolina state house. A June shooting at a black church in Charleston, S.C., that left 9 dead has sparked debates over the Confederate flag's place in the South. The alleged killer, Dylann Roof, was white and posted numerous photos online of himself with the rebel flag.