Justin Kobylka, a snake breeder in Georgia, sold a rare ball python for $6,000 after the reptile ended up with the shape of three smiley faces on its body.

GAINESVILLE, Ga. - A snake breeder in Georgia is receiving s-s-so much attention for a rare ball python he sold for $6,000 with the shape of three smiley faces on its body.

Justin Kobylka of J. Kobylka Reptiles has been breeding snakes for two decades. With this particular snake, called a lavender albino piebald ball python, or "dreamsicle" ball python for short, many are drawn to its bright golden yellow and white color combination.

Every so often, Kobylka says, breeders will notice a snake with a smiley face in its markings, but "it happens very randomly."

"When it does happen, it’s extra special," he said. "But this particular animal that’s on the news happened to have three of them on it, which is just astronomically rare for that it happen three times on one snake like that." 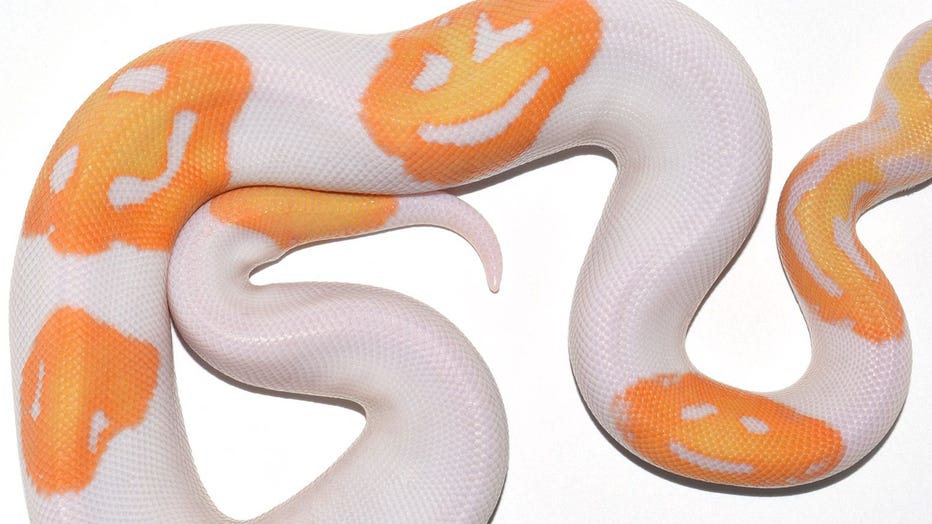 The snake, called a lavender albino piebald ball python, or “dreamsicle” ball python for short, is pictured in a provided image with the three smiley faces on its body. (Photo: Justin Kobylka / J. Kobylka Reptiles)

At first, Kobylka said he only noticed one of the smiley faces on the snake after it first hatched in 2016. The next time he looked, he realized there were two faces.

"I thought, ‘Oh, that’s really, really cool.’ We almost never see that. So then I went and got my camera and thought this will be interesting to put online," he recalled. "As I was doing the video of it that has gone viral, that’s when I noticed a third smiley face."

Ball pythons are a python species native to West Africa and the most common python that is kept as a pet, Kobylka says. They usually grow to about 5 feet long and 10 to 15 pounds.

Kobylka, who began breeding snakes as a hobby that later turned into a livelihood, has bred numerous snakes with different colors and patterns. He maintains active YouTube and Instagram accounts sharing about the reptiles.

His three-face python was sold in 2017, but it has received renewed attention online for its unique markings. In one video posted this week, he explained how the "emoji" ball python came to be — stating that this species in the wild is polymorphic.

"Over the course of the last few decades, we’ve found quite a few in the wild that look different for one reason or another — natural selection, mutations occur. And we are able to find those animals in the wild and bring them into captivity and reproduce the unique look that actually happened naturally," Kobylka said.

"Through this process, we’re able to actually create snakes by combining these different natural mutations. We’re able to create snakes that would never occur in the wild because they would be unable to find each other because of the randomness of natural selection," he added.

A "dreamsicle" ball python without the smiley faces may sell for around $3,000 — but because of the three special markings, he sold it for double that price. Though it wasn’t entirely the emoji faces that sold the buyer.

"That particular mutation as it grows, the white areas tend to fill in with color, so it was slowly losing the smiley faces," he said. "They bought it because it’s a special snake and cool, it’s got cool history. They bought it because they would like to use it to make more ‘dreamsicles’ down the road."