When does Artemis l launch?

CAPE CANAVERAL, Fla. - Tens of thousands of spectators will head to Florida's Space Coast to watch the liftoff of the Artemis l moon rocket mission on Monday. The 2-hour launch window opens at 8:33 a.m. EDT. With so many drivers on the road, plus five cruise ships disembarking that day, you can bet that traffic will be a nightmare.

Competing for parking and that "perfect vantage spot" will be challenging. So the best piece of advice is this: arrive early.

"It’s going to be a madhouse out here," said Ron Crossing. "Everybody just needs to keep calm. Be patient."

Courtney Winters said, "Make sure you’re where you need to be way ahead of time."

City officials are urging people to get errands done over the weekend to avoid Monday morning delays. They are expecting traffic to be at its worst after the launch window closes.

Brevard County Communications Director Don Walker told Florida Today that there will likely be gridlock in some areas and that the earlier you leave, the better. Walker also suggests making sure you have plenty of water and snacks on the road since you could potentially be stuck in traffic for hours.

Port Canaveral officials released the following details for drivers heading to the area to watch the Artemis launch:

Electronic signs on State Road 528 and A1A and on Port Canaveral roadways and intersections will advise motorists of road restrictions, as well as when parking capacity has been reached at designated parking areas.

RELATED: Artemis l: How to watch the historic launch online and along Florida's Space Coast

Brevard County deputies will monitor traffic, control key traffic intersections, and enforce parking on and around the Port. 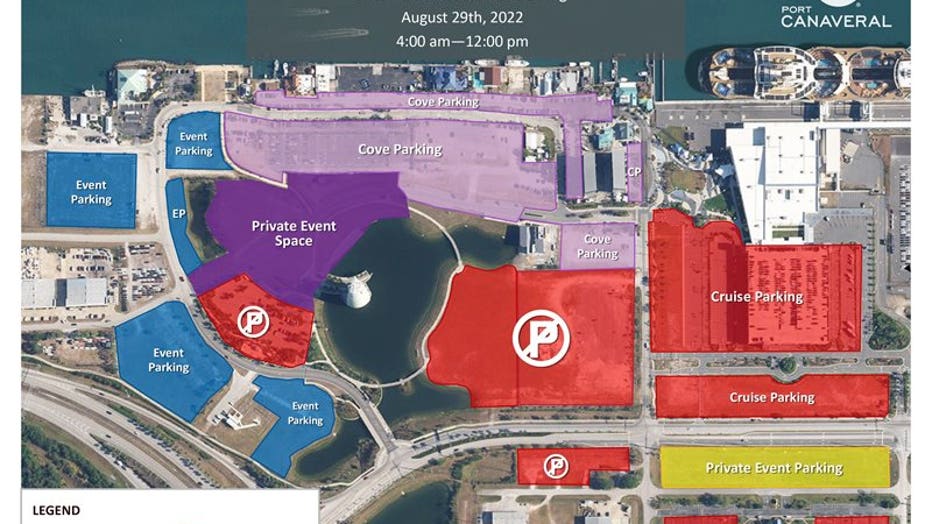 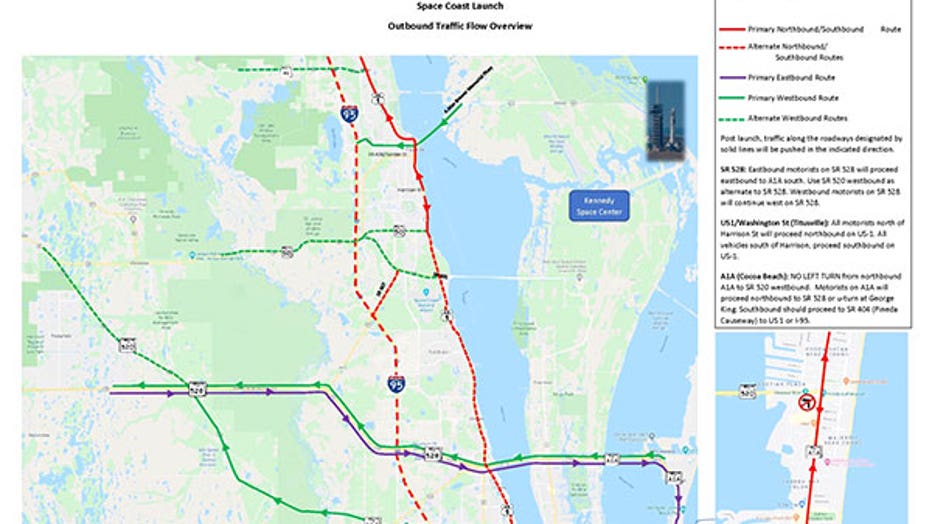 COVE PARKING FOR RESTAURANTS AND BUSINESSES

TRAFFIC IN AND AROUND THE PORT

WHEN IS ARTEMIS LAUNCHING?

The Artemis l mission is expected to launch from NASA's Kennedy Space Center in Florida on Monday, Aug. 29, with a 2-hour window from 8:33 a.m. EDT - 10:33 a.m. NASA's first moon rocket in 50 years is slated for its maiden launch as a precursor for human flights to the moon.

After launching, the SLS will send the Orion spacecraft on a trajectory to orbit the moon for a 42-day mission before returning to Earth on Oct. 10, 2022. 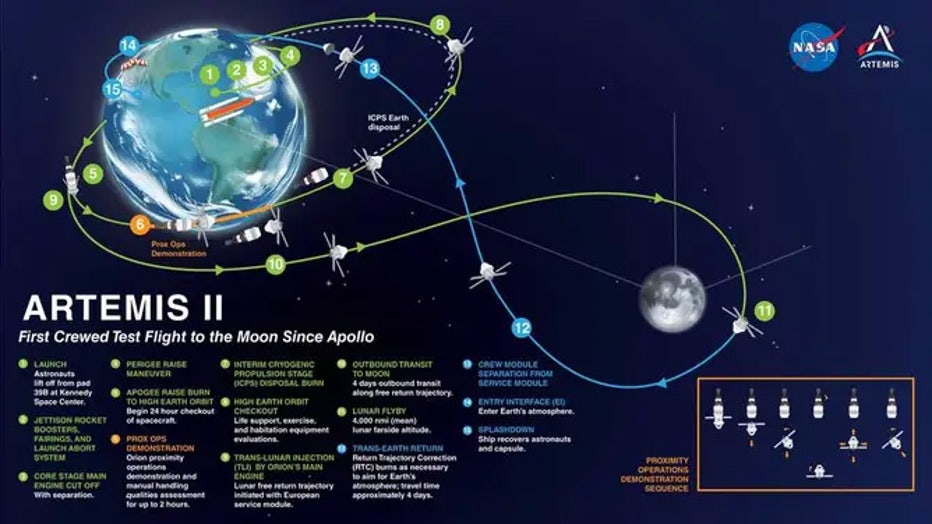 Artemis II: Astronauts on their first flight aboard NASA’s Orion spacecraft will travel farther into the solar system than humanity has ever traveled before. (NASA)

WHERE CAN I WATCH THE ARTEMIS LAUNCH?

Beginning at midnight on Monday NASA will begin coverage on NASA.gov, NASA TV, and YouTube with commentary as the SLS rocket is fueled. At 6:30 a.m. full coverage begins and will continue until after Orion is on the path to the moon. Coverage in Spanish starts at 7:30 a.m. on NASA en español’s YouTube, Twitter, and Facebook accounts.

If you want to watch in person, parking will be tight in many of the most popular viewing locations, including Space View Park in Titusville, Jetty Park in Cape Canaveral and along the beaches in Brevard County. Most beach parks have limited parking lots. Downloading the Passport Parking app is the easiest way to pay for parking on your phone.

Along the Indian River in Titusville, which runs parallel to Kennedy Space Center, is also a good option for launch viewing. You can find a complete list of viewing spots HERE.

ARTEMIS 1 TEAM COVERAGE on FOX 35: FOX 35 and Good Day Orlando will have team coverage from Kennedy Space Center, beginning at 4 a.m. You can watch the launch live on FOX 35, and livestream our special coverage at FOX35Orlando.com/Live and in the FOX 35 app.

WHAT WILL THE WEATHER BE ON LAUNCH DAY?

Artemis l launch forecast: Will weather be an issue for liftoff?

Artemis l is expected to lift off from the Kennedy Space Center in Florida on Monday, but there is some rain in the forecast. Will it affect the launch?

Launch forecasters with the 45th Weather Squadron are predicting a 70% chance of favorable weather for the Artemis 1 liftoff. It is summer in Florida, and the primary concerns will be any storms that roll in, creating cumulus cloud coverage, rain and lightning. The SLS can only launch under specific weather criteria, including constraints regarding temperature, wind, rain, cloud cover and lightning.

The rocket will also not launch if mission managers believe winds could create a problem for the launch vehicle during ascent.