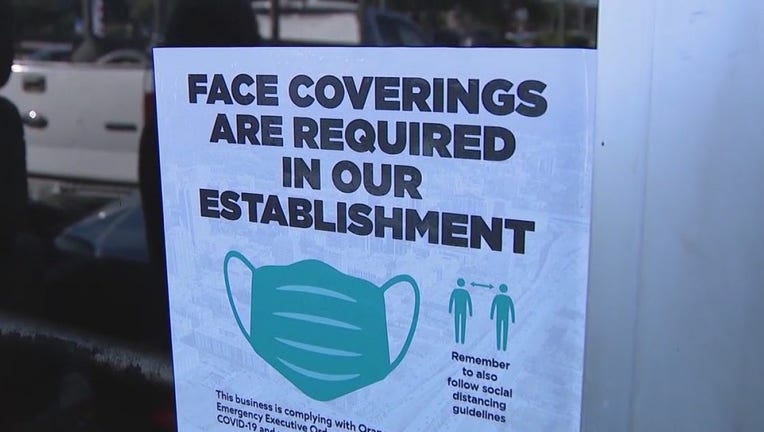 TALLAHASSEE, Fla. - A state appeals court Wednesday rejected a challenge to a Palm Beach County requirement that people wear face masks in businesses and other public places to prevent the spread of the coronavirus.

The 10-page ruling by a panel of the 4th District Court of Appeal upheld a circuit judge’s refusal to issue a temporary injunction to block the mask mandate. It also came after similar challenges have been filed to mask requirements in other parts of the state.

Five residents who filed the Palm Beach County case argued in the appeal that the mask mandate violated a constitutional right to refuse medical treatment and that the circuit judge used an incorrect legal standard in evaluating the issue. But the appeals court said the Palm Beach county requirement "does not implicate the constitutional right to choose or refuse medical treatment."

"(Requiring) facial coverings to be worn in public is not primarily directed at treating a medical condition of the person wearing the mask/shield," said the ruling, written by Judge Alan Forst and joined by Judges Martha Warner and Mark Klingensmith. "Instead, requiring individuals to cover their nose and mouth while out in public is intended to prevent the transmission from the wearer of the facial covering to others (with a secondary benefit being protection of the mask wearer). Requiring facial coverings in public settings is akin to the state’s prohibiting individuals from smoking in enclosed indoor workplaces."

Palm Beach County issued an emergency order in June that required face coverings to be worn at businesses and government facilities, on public transportation, and in other public places where social distancing is not possible. The order, which has been extended several times, includes exceptions to the mask requirement for such things as eating, according to the appeals court.

Days after the order was issued, the residents filed a lawsuit seeking a temporary injunction and raised issues such as alleged violations of privacy and due-process rights. After the circuit judge ruled against them, they went to the appeals court, where they focused on the issue of whether the order violated the right to refuse medical treatment, according to the ruling.

Gov. Ron DeSantis has declined to issue a statewide mask mandate amid the coronavirus pandemic, but numerous local governments have approved such requirements. Palm Beach County has been one of the hardest-hit areas of the state during the pandemic, with 103,495 reported cases and 2,125 resident deaths as of a Tuesday count, according to the Florida Department of Health.

The local mask requirements, however, have drawn fierce opposition --- and legal challenges --- from residents in some areas of the state. The 1st District Court of Appeal, for example, heard arguments in November in a challenge to an Alachua County mask requirement, though it has not issued a ruling.