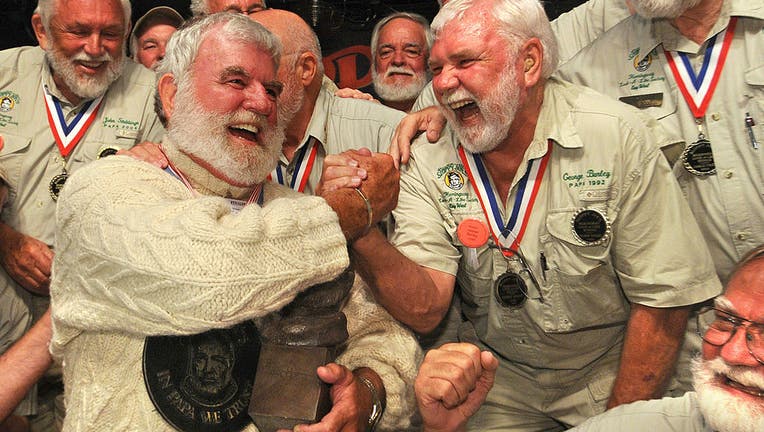 KEY WEST, FL - JULY 19: (NO SALES, EDITORIAL USE ONLY) In this photo provided by the Florida Keys News Bureau, Tom Grizzard (2L) of Leesburg, Florida, is congratulated by George Burley (2R) and other previous winners after he won the 2008 "Papa" Hemi

This year’s competition attracted 135 portly, bearded men, who are endeavoring to prove their likeness to the famed American author. The contest is a highlight of Key West’s annual Hemingway Days festivities, staged to celebrate the creative talent and colorful lifestyle of the man who lived and wrote on the island for most of the 1930s.

Thursday night’s entrants paraded across the stage at Sloppy Joe’s Bar, where Hemingway and his cohorts often met for drinks, before a judging panel of former contest winners.

Most had full beards and wore sportsman’s attire, seemingly emulating the "Papa" persona adopted by Hemingway in his later years.

On Thursday morning, a group of look-alikes helped release a 185-pound (83-kilogram) rehabilitated loggerhead sea turtle, coincidentally dubbed "Papa" when it was rescued after being entangled in fishing line, off the Florida Keys’ Sombrero Beach in Marathon.

The look-alike contest’s second preliminary round is set for Friday, and the 2022 winner is set to be chosen Saturday night.

Late Wednesday, Nick Henke of St. Louis, Missouri, was named the winner of the Lorian Hemingway Short Story Competition. His entry, "A Lot of Carrefours," triumphed over 775 other American and international submissions, judged by Ernest Hemingway’s author granddaughter.

Hemingway Days continues through Sunday with events including an offbeat "Running of the Bulls" spoof and the Key West Marlin Tournament.

While living in Key West during most of the 1930s, Hemingway wrote classics including "For Whom the Bell Tolls" and "To Have and Have Not."