Assange supporters celebrate as British court rejects extradition to US

Supporters of Wikileaks founder Julian Assange celebrate outside the Old Bailey court in central London after a judge ruled that Assange should not be extradited to the United States to face espionage charges. (Credit: Andela Milivojevic via Storyful)

LONDON - The human rights group Amnesty International is calling for the release of Wikileaks founder Julian Assange ahead of a hearing against a decision by U.K. courts in January to reject the United States’ request to extradite the Australian-born activist to face espionage charges over the publication of secret U.S. documents a decade ago.

U.S. prosecutors have indicted Assange on 17 espionage charges and one charge of computer misuse over WikiLeaks’ publication of thousands of leaked military and diplomatic documents. The charges carry a maximum sentence of 175 years in prison.

Lawyers for Assange argue that he was acting as a journalist and is entitled to First Amendment protections of freedom of speech for publishing documents that exposed U.S. military wrongdoing in Iraq and Afghanistan.

Lawyers for the U.S. government denied that Assange was being prosecuted merely for publishing, saying the case "is in large part based upon his unlawful involvement" in the theft of the diplomatic cables and military files by U.S. Army intelligence analyst Chelsea Manning.

Amnesty International said its call to drop the charges against Assange came after allegations that "U.S. security services considered kidnapping or killing Julian Assange when he was resident in the Ecuadorian embassy in London."

"Assurances by the U.S. government that they would not put Julian Assange in a maximum security prison or subject him to abusive Special Administrative Measures were discredited by their admission that they reserved the right to reverse those guarantees. Now, reports that the CIA considered kidnapping or killing Assange have cast even more doubt on the reliability of U.S. promises and further expose the political motivation behind this case," said Amnesty Secretary-General, Agnès Callamard. 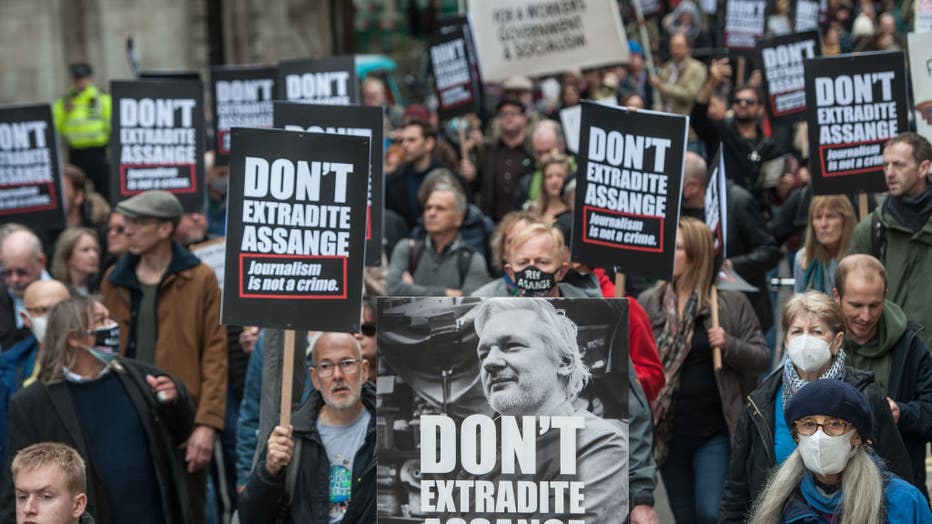 Supporters of Julian Assange marching on October 23, 2021 in London, England. Protesters march From the BBC to the High Court, demanding that Julian Assange is not extradited to the USA.

"It is a damning indictment that nearly 20 years on, virtually no one responsible for alleged U.S. war crimes committed in the course of the Afghanistan and Iraq wars has been held accountable, let alone prosecuted, and yet a publisher who exposed such crimes is potentially facing a lifetime in jail," Callamard added.

An appeal process for Assange’s extradition to the U.S. is set to begin in London on Wednesday.

The U.K.‘s current extradition agreement with the U.S. says that extradition can be blocked if "by reason of the person’s mental or physical condition, it would be unjust or oppressive to extradite him."

The decision to block Assange’s extradition in January was determined by U.K. District Judge Vanessa Baraitser who said he was likely to kill himself if held under harsh U.S. prison conditions.

The judge said that U.S. prison conditions would be oppressive, saying there was a "real risk" he would be sent to the Administrative Maximum Facility in Florence, Colorado. It is the highest security prison in the U.S., also holding Unabomber Theodore Kaczynski and Mexican drug lord Joaquin "El Chapo" Guzman.

Baraitser accepted evidence from expert witnesses that Assange had a depressive disorder and an autism spectrum disorder.

"I am satisfied that, in these harsh conditions, Mr. Assange’s mental health would deteriorate, causing him to commit suicide with the single-minded determination of his autism spectrum disorder," the judge said.

This was not the first time the U.K. has refused extradition to the U.S. on those grounds.

The prosecution of Assange has been condemned by journalists and human rights groups, who say it undermines free speech and imperils journalists. They welcomed the judge’s decision, even though it was not made on free-speech grounds.

Assange’s legal troubles began in 2010 when he was arrested in London at the request of Sweden, which wanted to question him about allegations of rape and sexual assault made by two women. In 2012, Assange jumped bail and sought refuge inside the Ecuadorian Embassy, where he was beyond the reach of U.K. and Swedish authorities — but also effectively was a prisoner, unable to leave the tiny diplomatic space in London’s Tony Knightsbridge area.

The relationship between Assange and his hosts eventually soured, and he was evicted from the embassy in April 2019. British police immediately arrested him for breaching bail in 2012.

Sweden dropped the sex crimes investigations in November 2019 because so much time had elapsed, but Assange has remained in London’s high-security Belmarsh Prison throughout his extradition hearing.