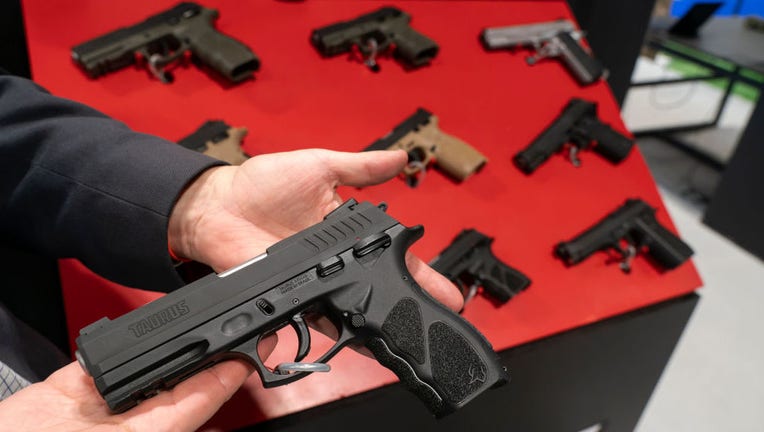 A seller shows off one of the pistols on his stand at the SICUR 2022 International Security Show. (Photo by Joaquin Gomez Sastre/NurPhoto via Getty Images)

American gun sales remained strong in 2021, with nearly 19 million firearms sold legally in the U.S., the second-highest total over the past two decades, according to new research from the home and personal safety group SafeHome.

"On an overall and population-adjusted basis, more people are buying guns in almost every state," according to the organization. 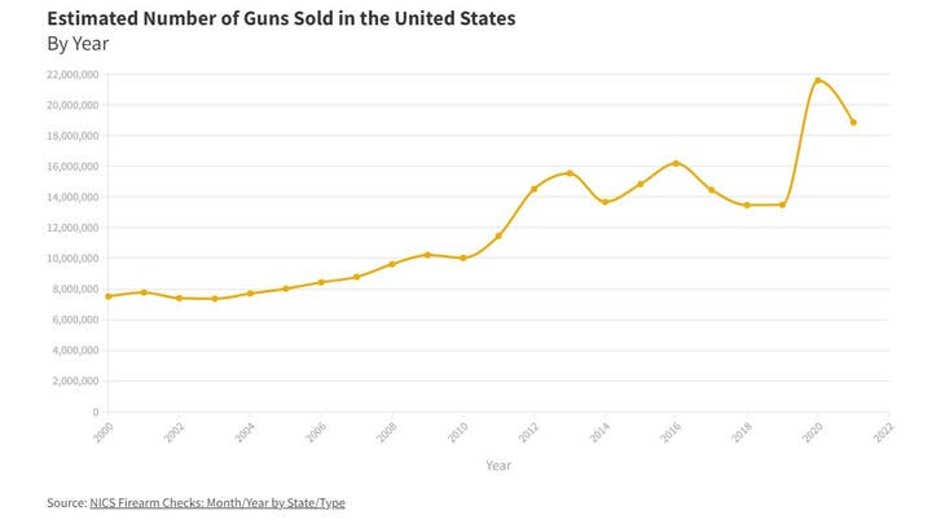 American gun sales remained strong in 2021, with nearly 19 million firearms sold legally in the U.S., the second-highest total over the past two decades, according to new research from the home and personal safety group SafeHome. (SafeHome.org)

Corie Colliton the senior editor of industry research at SafeHome.org, told FOX Business that 2019 saw around 13.5 million firearms sold. That number grew to 21.5 in 2020 before dropping slightly last year.

As for 2022, Colliton declined to make projections about where sales may end up later this year.

Texas, Florida, California and Pennsylvania all saw more than 1 million gun sales last year. The state with the fewest was Hawaii, with just 33 – which is actually more than were sold there a year earlier.

In 2020, Americans purchased more than 21 million gun sales, according to the research. The previous high was in 2016, with 16 million.

However, the death rate from firearms also rose around 14% last year, according to the study.

Only eight states went without a firearms-related incident in a school in 2021, Colliton said. The states which saw the most were Illinois, California, New York and North Carolina, in that order.

Guns killed more Americans per 100,000 people in 2020 than breast cancer, Parkinson’s or motor vehicle accidents, she said. And mass shootings have doubled since the 1980s.

She said that FBI data revealed gun-related deaths rose 50% between 2001 and 2021. In 2020, 55% of firearms-involved deaths were suicides. Forty-three percent were assaults, and the rest were classified as "legal intervention" or from other causes. 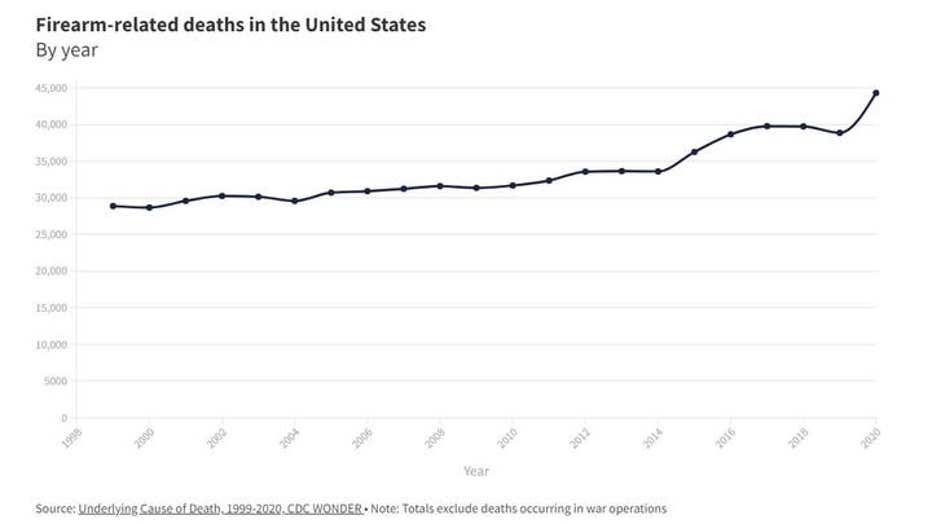 The spike in suicides came amid coronavirus pandemic lockdowns that left millions of people lonely and cut off. Big cities across the country are reporting rising crime, while progressive Democrats have called for cutting back on police budgets and replacing officers with unarmed social workers.

"Over the last two years, law-abiding Americans have watched criminals acting with impunity while police departments are defunded," Lars Dalseide, a spokesperson for the National Rifle Association, told FOX Business Monday. "They've learned that their safety is ultimately their responsibility. Those are the primary driving forces for increased gun sales and also increased support for NRA-backed constitutional carry legislation making it legal for law-abiding gun owners to carry for self-defense without a permit from the state."

The researchers used data from the FBI’s National instant Criminal Background Check for all 50 states and Washington, D.C., to estimate sales.

Dave Katz, CEO of Global Security Group, said that public safety concerns among suburban residents who live near areas afflicted by riots last summer may have led many of them to buy guns for the first time.

"People saw immediate unrest and also realized that law enforcement was not going to be able to protect them," he told FOX Business on Monday. "There is also a general inclination to buy firearms every time a Democrat administration takes office – the fear is legislation will limit certain types of firearms from being available."

SafeHome data from prior election years shows spikes in gun sales in all of the most recent presidential elections, going back to President Barack Obama’s first term.

"We have a lot of interest in upcoming classes now that we are getting out of these ridiculous COVID restrictions," he told FOX Business on Monday. "There are millions of first-time gun owners who are in need of training and who realize that fact."

"There’s been a 100% increase in gun sales," he said. "The shops here are always full. Sales are through the roof."

Hobel said it may be because Democrats are controlling the levers of Washington, D.C., for the time being, and people fear new gun control laws.

"People are waking up to the potential of government overreaching, again," he said. "It’s not just men, it’s literally everyone who is buying."

Excise taxes on hunting, shooting and fishing equipment, as well as boat fuel, led to the funding.

The Associated Press reported that the 85-year-old program surged by 60% this year and beat the all-time high of $808 million set in 2015.