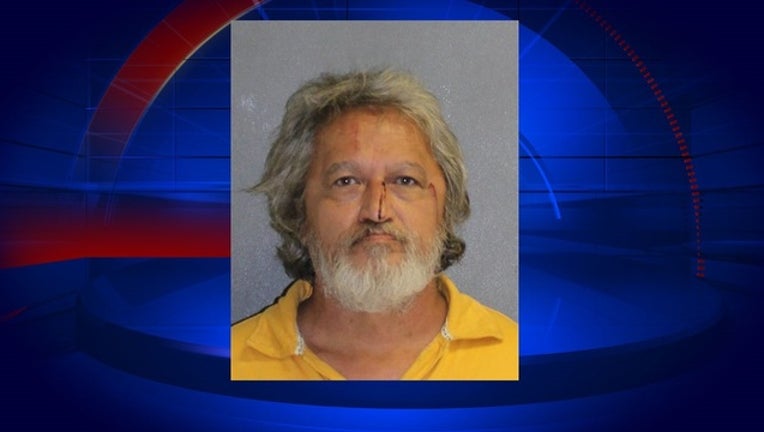 DAYTONA, Fla. (WOFL FOX 35) - The Volusia County Sheriff's Office stated that there was an altercation Sunday night outside of a food mart near Daytona Beach. This confrontation reportedly resulted in a stabbing that sent one man to the hospital and landed another man in jail for aggravated battery with a deadly weapon.

According to the Volusia County Sheriff's Office, deputies were dispatched to a Kelly's Food Mart on Derbyshire Road around 6:45 p.m. Upon arrival, they found a store clerk rendering aid to 57-year-old victim David Davidson, who was covered in blood from lacerations to his face and torso.

Deputies say that the victim as not able to provide much information about what happened, but he did identify the suspect as 51-year-old William Christy. Christy was still at the scene when deputies arrived. He also had lacerations on his face and nose.

A metal pipe and pocket knife were retrieved from the scene, according to the Volusia County Sheriff's Office. The knife was not too far from where Christy was standing.

The store clerk told deputies that Davidson was a regular customer who had been in the store several times that day and appeared to be drunk. Right after his 6:40 p.m. visit is when he came back into the store saying that he had been stabbed.

Davidson was reported to have been transported to Halifax Health Medical Center in Daytona Beach, where he underwent surgery and was in the intensive care unit listed in stable condition.

Christy told deputies that the victim had struck him with the metal pipe, but when detectives attempted to interview him, Christy declined to answer their questions.

Christy was reported to have been taken to the Volusia County Branch Jail in Daytona Beach, where he was initially being held without bond.

Sheriff’s detectives wrote in the charging affidavit: “Based on the evidence at the scene, and the victim identifying the defendant as the person who stabbed him, detectives determined some type of physical altercation occurred outside of the store and the defendant stabbed the victim multiple times for unknown reasons.”