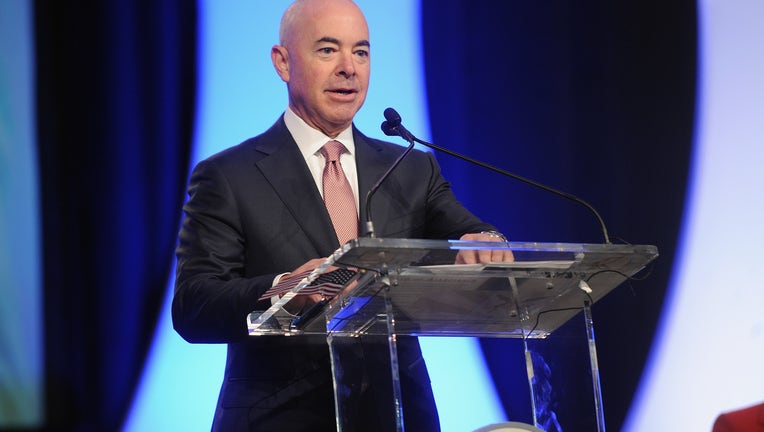 President-elect Joe Biden has tapped Alejandro Mayorkas for his secretary of Homeland Security. Mayorkas is the first Latino and immigrant to be nominated to the position in U.S. history.

Biden’s announcement came Monday as he made public other picks for his national security team and cabinet.

“Their accomplishments in diplomacy are unmatched,” Biden pointed out in a statement. “But they also reflect the idea that we cannot meet the profound challenges of this new moment with old thinking and unchanged habits — or without diversity of background and perspective. It’s why I’ve selected them.”

Mayorkas, for his part, is already familiar with the inner workings of the Department of Homeland Security —an experience that he will call upon in his new role in an agency where he served during the Obama administration.

President-elect Joe Biden introduced his nominees for his cabinet Tuesday.

Mayorkas’ experience in law enforcement has spanned three decades. He served as the deputy secretary for Homeland Security during the Obama administration from 2013 to 2016.

While at DHS, Mayorkas helped launch the Deferred Action for Childhood Arrivals, or DACA program, as well as worked on cybersecurity initiatives with foreign governments.

Mayorkas played a leading role in the country’s response to the Ebola and Zika outbreaks, and he worked on combating human trafficking. He also worked as the Director of U.S. Citizenship and Immigration Services from 2009 to 2013.

Mayorkas started his government service in the Department of Justice, serving as an assistant U.S. attorney in California’s Central District with an emphasis on prosecuting white-collar crime.  He then became the U.S. attorney for that district, prosecuting crimes such as financial fraud, violations of the Foreign Corrupt Practices Act, public corruption, violent crime, cybercrime, environmental crime, international money laundering and securities fraud.

He also worked in the private sector as a private lawyer for O’Melveny & Myers, and most recently, WilmerHale.

Mayorkas was born in 1959 in Havana, Cuba. He received his bachelor’s degree from the University of California at Berkeley and a law degree from Loyola Law School.

He joined Twitter this month, thanking Biden in his first tweet. He has a picture of his family in his cover photo.

Mayorkas has achieved some historic firsts. In 1998, he was the youngest U.S. attorney. He was the highest-ranking Cuban-American under Obama. And he helped negotiate the first homeland security memorandum of understanding between the U.S. and Cuba, where he was born.

In his new role, Mayorkas role will oversee the Department of Homeland Security and its efforts to combat terrorism and work to secure the country’s borders. Mayorkas will also have a hand in enforcing immigration laws, cyberspace and disaster responses while working with local, state and federal governments.

“His knowledge of the department and ability to hit the ground running will enable him to start the repair work that is sorely needed," said Alan Bersin, a former assistant secretary in the Office of Policy at DHS.

Among Mayorkas’ likely targets while serving in the Biden administration will be Trump’s unfinished border wall, as well as Trump’s border policies. Biden has indicated that he plans to halt work on the U.S.-Mexico border wall, which is currently under construction. Biden also said he would end the separation of families at the border.

If confirmed by the Senate, Mayorkas, who turns 61 on Tuesday, would be the first Hispanic, and immigrant, to lead DHS. He noted the poignancy in a tweet after his nomination was announced.

“When I was very young, the United States provided my family and me a place of refuge,” he said. “Now, I have been nominated to be the DHS Secretary and oversee the protection of all Americans and those who flee persecution in search of a better life for themselves and their loved ones.”

This story was reported from Los Angeles. The Associated Press contributed to this report.