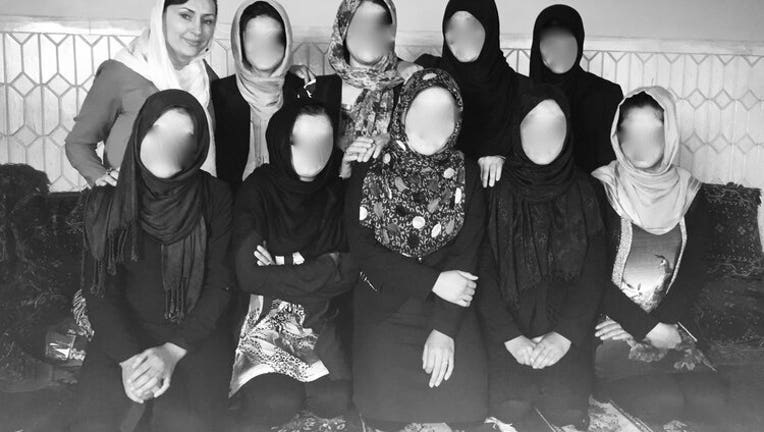 Humaira Ghilzai pictured with female scholars (whose faces are blurred) in Kabul under the Taliban regime.

SAN FRANCISCO - Humaira Ghilzai couldn't immediately answer the phone early Tuesday morning. That's because she was already "on the phone with Kabul," specifically with the director of a girl's school in Afghanistan to see how dire the situation is there because of the Taliban takeover.

The Afghan native who now lives in San Francisco has for years run a nonprofit dedicated to education and amplifying the voices of women and children in her home country, which she fled in 1980 after the Russian invasion.

And unfortunately, she has seen Taliban takeovers before.

"And for those of us who escaped Afghanistan, this current situation really feels real because we feel the same terror… that our families felt when we fled Afghanistan," she said in an interview on Tuesday. "And to see these people scrambling, trying to get out, trying to get to safety really brings back a lot of terrible feelings and PTSD for me and a lot of my Afghan friends and colleagues and family."

She talks daily to people still living in Afghanistan, and whom have been living with the Taliban for the past 10 years, because the fundamentalist group never left; they lived in the rural areas, collecting taxes, "attacking teachers and throwing acid at girl's faces."

Humaira Ghilzai reacts with fear as the Taliban takes over her native Afghanistan. James Torrez reports

MORE: Former translators who escaped to Fremont from Afghanistan fear for family

"They have been actively oppressing the Afghan people," Ghilzai said. "Terrorizing them all these years. It's just that now, they have taken over Kabul."

Even with the Taliban's new claims that they promise to respect women's rights, Ghilzai is on the fence about their latest pledge.

"Let's remember, they've only been in Kabul for three days," she said.

As for her close network of friends and family, Ghilzai said her male cousin was able to get his family out a few months ago, and feels he will do OK.

But her female cousin and her daughter are terrified because her husband is out of the country and her father died.

"They know soon they will not be able to move around without a man's accompaniment," Ghilzai said. "They feel a lot more exposed."

And then there is a very outspoken teacher, who has been running secret schools since the first Taliban takeover.

"And for her, it's terrifying because she's a known commodity," Ghilzai said. "So she is really, really scared."

So now, Ghilzai is working hard to get her out of Afghanistan.

"We feel responsible," she said. "She's been a voice for Afghan women, has implemented a lot of improvements in education. And now she feels really abandoned."

As Ghilzai explained it, she doesn't expect a huge influx of refugees to flood the Bay Area.

Afghan refugees must first go to another country for 12 to 14 months before they even get a visa to the United States.

"So where they will end up really does not matter to us," she said.  "We just want them out of Afghanistan at this point. If they end up in the Bay Area, that would be wonderful. But we find that a lot of refugees have a hard time thriving here because of the high-expense rate of living. So in her case, we will do our best to get her out. And then where she ends up settling is going to be a question that we will just deal with as the time goes."

As for the larger picture, Ghilzai said she wants the general public to not give up on Afghan women, girls and boys.

She wants American citizens and the wider international community to "press Pakistan from meddling into Afghanistan and aiding and abetting the Taliban."

She also wants diplomats, the United Nations Human Rights Watch, and "all the feminist organizations who have been sitting there quietly and not saying anything to stand up and put pressure on the Taliban. I'm hoping that people will  actually take action, because I do know a lot of people are concerned and they do want to do something."