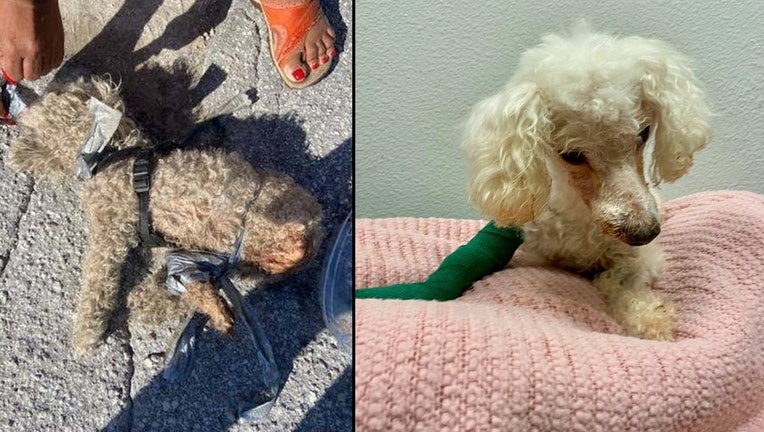 The poodle that was found hogtied with her mouth taped shut behind an Orlando business continues to make improvements.

"Sweet Petal has gained a few more ounces of weight and is off her fluid IV," Poodle and Pooch Rescue said. "She is still eating several small meals a day of soft food and she attacks it with gusto shoving her snout in the bowl (and her face, and her ears…)."

The rescue says Petal still spends the majority of her time sleeping, "but will lean in and snuggle when you stop to give her some ear scratches and hugs."

The little pooch who stole hearts across the internet is still hospitalized. The rescue says she will remain there until she is stable enough to go more than a day or two without IV fluids.

"But for now, she is snoozin’ and snackin’, her two favorite things."

Little Petal recently got a makeover and looks like an entirely new dog! The rescue even described her as ‘sassy.’

Last month, a good Samaritan found her dumped in a plastic bag, hogtied with her mouth duct-taped shut, and ‘near death.’ The rescue says her eyes were matted shut and she was emaciated, dehydrated, and weak. They weren't sure how long she would survive.

The person who left Petal to die has not been found. The rescue is asking for anonymous tips to be sent to JusticeForPetal@gmail.com.

The Orange County Sheriff's Office is also still investigating to find out who did this Petal. Anyone with information is urged to give CrimeLine a call at 800-423-TIPS.

The rescue recently took in another dog named Teddy who had been shot nearly 100 times with pellets that were still embedded in his body.

They hope that the people who did this to Teddy and Petal are brought to justice.