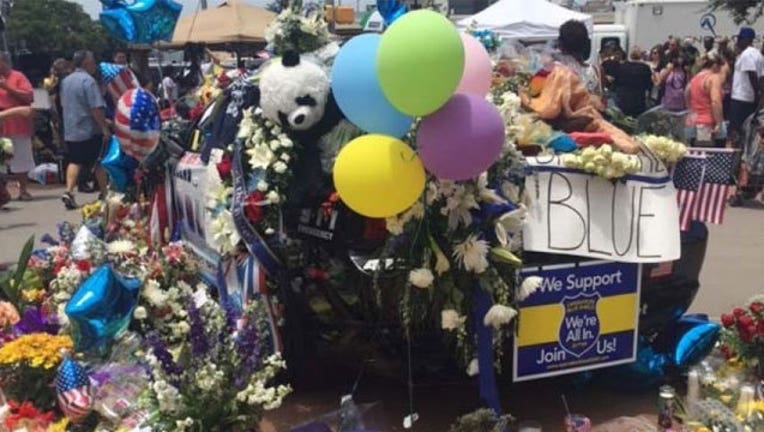 DALLAS (AP) - Only hours after the ambush that killed five Dallas law enforcement officers, mental health experts began thinking ahead, searching for ways to ease the long-term effects of the attack on the men and women who patrol the nation's ninth-largest city.

Police psychologists in Dallas were quickly joined by counselors from the Houston and Los Angeles police departments, the FBI and the federal air marshals service. As she watched the July 7, 2016, assault unfold on the news, Dallas philanthropist Lyda Hill immediately thought of research she had funded to help returning combat veterans. Maybe it could help police too.

A year later, Dallas officers are still grieving, but scores of them have received or are on track to receive specialized training in "mindfulness" and other stress-management techniques that aim to teach police how to better understand and control their emotions, both on and off the job.

"One of the most powerful things you can do is teach people that it's OK to be human. It's not possible to walk through this profession and come out unscarred. It's a difficult, difficult walk to be a police officer," said Richard Goerling, a police lieutenant in Hillsboro, Oregon, who teaches the mindfulness training.

The late-night ambush happened during a downtown protest against police brutality. A black Army veteran seeking revenge for police shootings elsewhere that killed or wounded black men opened fire on the officers, killing four from the Dallas Police Department and another from a transit agency.

By early the next morning, the sniper, Micah Johnson, was dead, killed after police deployed a bomb-carrying robot.

Brown, who is now retired, remembered taking a call from the Oakland, California, police chief, whose department had also endured the killing of more than one officer in the line of duty. The Oakland chief emphasized the importance of offering mental health services.

Officers "may not seek it out right away, but it's a long-term impact on people," Brown said in a recent interview with The Associated Press.

Hill provided money to pay for instruction in mindfulness and in another system known as cognitive training for 500 Dallas officers over the next year. The Center for Brain Health at the University of Texas at Dallas plans to study the effects of the training on their mental and physical health and their job performance.

Goerling, who has been a leader in mindfulness training for the last decade, said traditional stress management often does not work for police.

"You aren't going to stop the stress, but you are able to change how you respond to it," he said.

The training has been done on a smaller scale in Seattle; Madison, Wisconsin; Cambridge, Massachusetts; and smaller California departments, among others. It aims to help officers recalibrate their responses to emotions so when in stressful situations, they can respond instead of react, Goerling said.

For example, if a burglary victim takes a gruff attitude with an officer, the officer's first reaction might be to respond with equal gruffness. But if the officer takes a few seconds to focus on his or her breathing, there's more chance to respond with understanding and mediate the situation.

When police first learn about the program, there's often a misconception that it's "hippies and granola people" making them chant in a circle, said Jenny Howland, a clinical psychologist and program manager for the mindfulness initiative at the brain center.

Instead, she explained, the goal is to provide officers with tools "to essentially reduce their stress and optimize their performance."

"When you're stressed, your mind wanders," she said. "You aren't focusing," which can lead to performance failures and poor decisions.

Senior Cpl. Frederick Frazier encourages fellow officers to set aside skepticism. He said the attack is "a massive wound" that still brings out anger and sorrow in many of his colleagues.

Frazier is chairman of the Dallas chapter of The Assist the Officer Foundation, a nonprofit that helps officers injured or families of officers killed in the line of duty. Since the slayings, the group has doubled the number of counselors it provides and tripled the payments for appointments.

After the first week of the mindfulness portion of the training, officers will attend exercises at a gun range or a live exercise depicting an active-shooter scenario to see how they use the new skills.

Close to 100 officers and department leaders have already gone through the cognitive training, which began in January. Though tailored to police officers, it is similar to the training the brain center has been working on with active-duty military veterans.

Staff decided to offer the cognitive training first because it trains people to use their mental bandwidth to its fullest potential, said Jennifer Zientz, the center's head of clinical services.

"The nature of their work is overwhelming. There's a constant influx of information all of the time, and it's unpredictable," she said. The training is aimed at building up officers' "cognitive reserve," which Zientz compared to "a brain bank."

"In theory, your brain should be able to bounce back better if you have this reserve," she said.

In the aftermath of last year's attack, Frazier said, the department's 3,000-plus officers feel as if they should have done more.

That anger and sorrow may someday fade, he said. "But in the meantime, our brains need maintenance just like our bodies need time to recover."