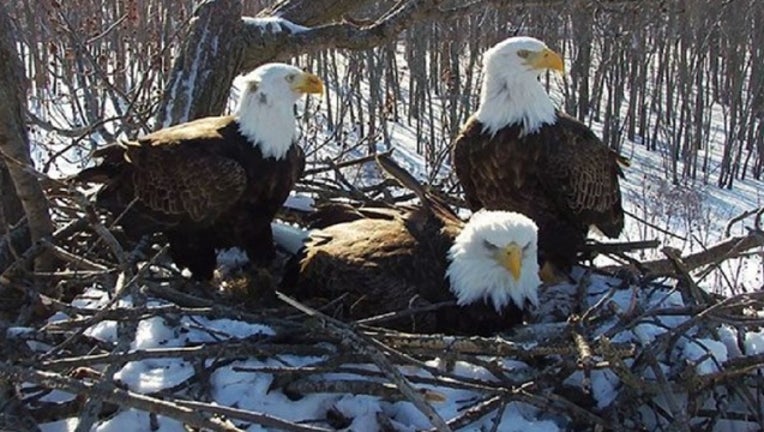 FOX NEWS - A trio of bald eagles is successfully raising eaglets in the backwaters of the Upper Mississippi River in Illinois.

The trio, which consists of two males (named Valor 1 and Valor II) and one female (Starr) live on the Upper Mississippi River National Wildlife and Fish Refuge.

READ MORE ON THIS STORY ON FOXNEWS.COM

“For several years, fans from all over the world have been watching this nontraditional family through a webcam as the eagles deal with the trials and tribulations of parenting,” explains the U.S. Fish and Wildlife Service, on its website.

The 2019 nesting season is going well, according to the Stewards of the Upper Mississippi River Refuge, which notes that three eggs have been hatched at the nest between March 27 and April 1. “The pantry is always full with a variety of fish, fowl and an occasional muskrat and turtle,” the organization said, in a YouTube post accompanying a webcam of the nest.

The nest’s original female, Hope, was killed by another eagle in 2017, with Starr arriving in September of that year. She successfully laid two eggs in mid-February 2018, supported by Valor I and Valor II. Both eggs hatched but one of the fledglings died of unknown causes three weeks later.

“Having more than two birds assist with feeding and rearing young isn’t all that uncommon, but it is interesting to see that these males seem to prefer the teamwork approach to raising a family,” explains the U.S. Fish and Wildlife Service.

The three parents work in shifts during the egg incubation period, according to officials. “During any given shift change at the nest, the relieving adult will land in the nest and nudge the incubator to take over duties,” they explain. “If nudging doesn’t work, then more aggressive moves such as walking on the tail feathers or back of the unrelenting incubator is conducted. If still no movement, the reliever will snuggle against the incubator and wait for an attitude change.”