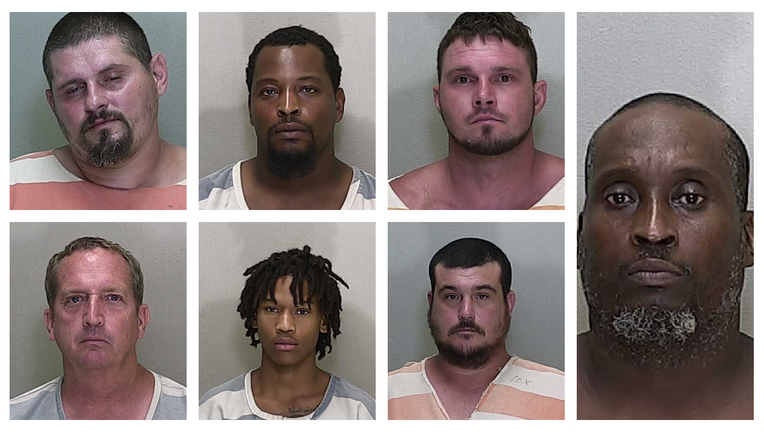 OCALA, Fla. - Seven men and a teenager in Central Florida were arrested for their alleged involvement in an illegal cockfighting operation at an Ocala home Saturday.

Cameron Taylor, Travis Lowe, Alan David Edwards, Tyrese Taylor, Brandon Taylor, Shaun Stuart, Dale Gorney and a 15-year-old were arrested while trying to run from the property when investigators arrived with a search warrant, according to the Marion County Sheriff's Office.

Investigators found 28 dead roosters scattered in piles across the property, three roosters that were badly hurt and three alive and unharmed inside a vehicle, deputies said. Authorities found a makeshift fighting ring with fresh blood, along with cages, injectable muscle power for roosters, metal spurs and multiple other items associated with cockfighting.

All were taken to the Marion County Jail on multiple charges including attending the fighting and baiting of animals.

Authorities said one of the suspects – Cameron Taylor – had been convicted of animal cruelty in 2011, for shooting his neighbor's dog, officials said in a news release. When they searched his vehicle during the cockfighting operation bust, they found cash, two guns and live ammunition.

(Note: The 15-year-old's mugshot is unavailable)