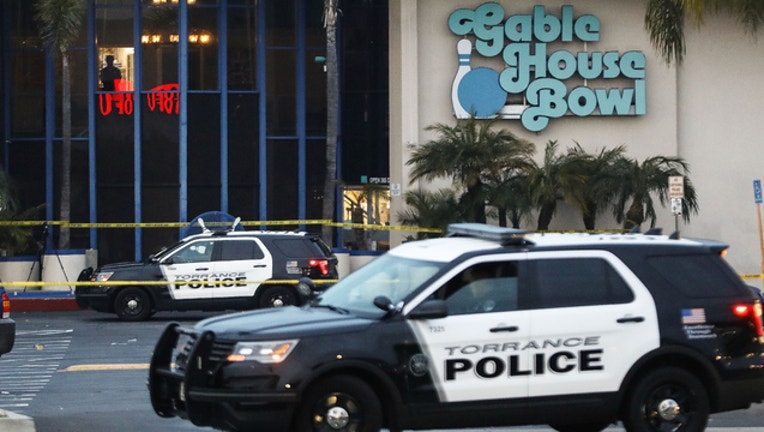 TORRANCE, Calif. (AP) - Three men were fatally shot late Friday and four injured when a brawl at a popular Los Angeles-area bowling alley and karaoke bar erupted into gunfire that had terrified patrons, some children, running for their lives.

Police in the coastal city of Torrance responded shortly after midnight to calls of shots fired at the Gable House Bowl. They found seven people with gunshot wounds.

Three men were pronounced dead at the scene and two were taken to a hospital, Sgt. Ronald Harris said. Two other men were struck by gunfire but "opted to seek their own medical attention."

Authorities have not identified the victims nor suspects or released details about what led to the shooting. Witnesses said it stemmed from a fight between two large groups.

Dwayne Edwards, 60, of Los Angeles, said he received a call from his nephew that his 28-year-old son, Astin Edwards, was one of those killed. His nephew told him his son was attempting to break up a fight when a gunman "just started unloading."

"I'm thinking this is a dream and I'll wake up," Edwards told the Orange County Register. "He was a good kid. I don't understand it."

A grieving mother told KABC-7 her 28-year-old son, Robert Meekins, was also trying to break up the fight and that Meekins and Astin Edwards were friends.

"They were friends, so I know he probably jumped in and helped Astin and whoever he was with ... but I don't think my son deserves to die," Anglean Hubbard said.

"My son was a loving person. He loved life, he loved his son, and he loved his family. Nobody can imagine what I'm going through right now," Hubbard said.

"He was happy. He was always a protector," Dumas said. "That's how he got into this, he was trying to protect others."

Wes Hamad, a 29-year-old Torrance resident, said he was at the bowling alley with his 13-year-old niece and cousin when he saw a "huge fight" break out. Hamad said the brawl, which lasted about five minutes, blocked the entrance and spiraled into "complete chaos."

"I grabbed my niece and started running toward the far end of the bowling alley," he said. "As we were running, we heard 15 shots."

As he was leaving, Hamad said he saw a woman weeping over a man who was had gunshot wounds to his head and neck.

Damone Thomas was in the karaoke section of the bowling alley, a regular stop for him and his friends after work on Fridays, when people ran in saying there was a shooting. The 30-year-old Los Angeles resident said his friend flipped a table to shield them as they heard gunshots.

Thomas said he didn't feel scared because he was "just trying to survive." But when he was driving home, he said he realized how traumatic the situation was and said he wasn't been able to fall asleep.

"Closing my eyes, all I can see is the women against the wall crying, not knowing what to do," he said.

Thomas and Hamad said they had never witnessed any violence there in the past. But Hamad said he had stopped going for a while because he heard someone with a gun was recently seen there.

"I definitely won't be going back anymore," he added.

In a tweet, California U.S. Sen. Kamala Harris said her heart breaks for the victims.

"We must do more to address gun violence," she said. "Americans should be able to go to a bowling alley and be safe."

This version corrects the spelling of Hubbard's name to Anglean instead of Angeline.