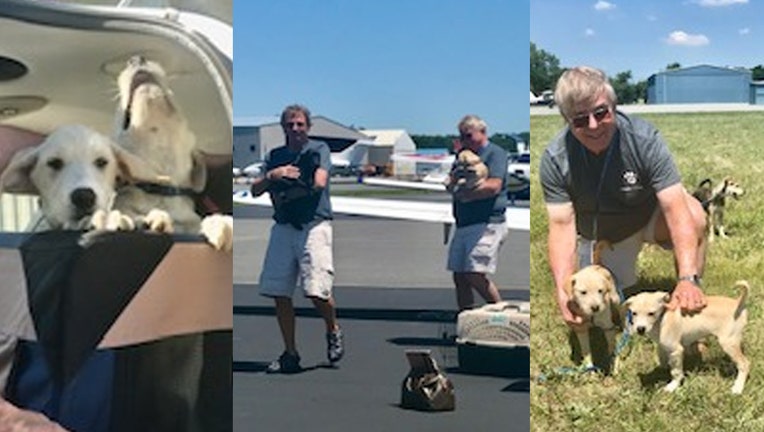 Ten puppies were rescued and flown to care thanks to the charity organization 'Pilots N Paws.'

The organization works to rescue animals by air. They posted about the puppy rescue this weekend.

They said that ten puppies and their mom were found in an abandoned home by small children in North Carolina. They were being sold outside of nearby grocery stores.

However, when the nonprofit ‘Tender Mercies Pet Organization’ heard about this, they reportedly went to the store, retrieved the puppies, and then gathered up the puppies that had already been bought.

"The pups were only a few weeks old and needed lots of medical attention," Pilots N Paws said. "After being nursed back to health, the puppies were ready for flight."

The puppies were driven to an airport in North Carolina and loaded into a Pilots N Paws plane, the organization said. They were taken to Delaware, where another pilot met them and loaded them up for their next flight.

"The pups were advised that there would be no inflight service, but they slept throughout the flight, so it didn’t matter," Pilots N Paws said. "Many PNP pilots are sincerely dedicated and will fly extra miles to get dogs to a safe shelter."

Eventually, they made their way to Islip, New York, and are now in foster care or have already been adopted.

Congrats, little pups! And as Pilots N Paws said, "thank you to Tender Mercies Pets and to Pilots Anne, Andrew, and Erik."