FOX 35 Storm Team Meteorologist Brooks Garner has the latest on the tropics, including Hurricane Same

ORLANDO, Fla. - Sam has downgraded into a Category 3 hurricane as it churns through the Atlantic and its path is being impacted by a pocket of high pressure.

The National Hurricane Center (NHC) said that Sam is still hundreds of miles away from any piece of land, churning towards the northwest at 9 mph. It is expected to continue this motion for the next few days. It should pass well to the northeast of the Leeward Islands on Wednesday and Thursday before turning toward the north is expected on Friday.

They also said that Sam, while weaker, is still a major hurricane. It is packing maximum sustained winds of 120 mph, making it a Category 3 storm. Fluctuations in strength are possible over the next few days but it should remain a major hurricane at least through Thursday night.

While Sam could bring some ocean swell to Central Florida’s beaches, the FOX 35 Storm Team Chief Meteorologist Jayme King said that it will stay well out to the east thanks to a pocket of high pressure. 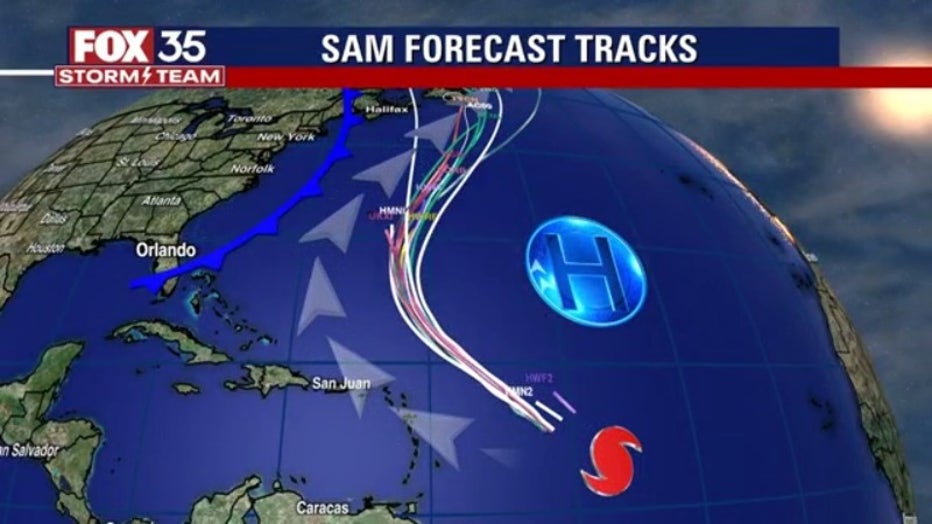 Meanwhile, the NHC said there are several other systems in the Atlantic that could soon become tropical depressions. 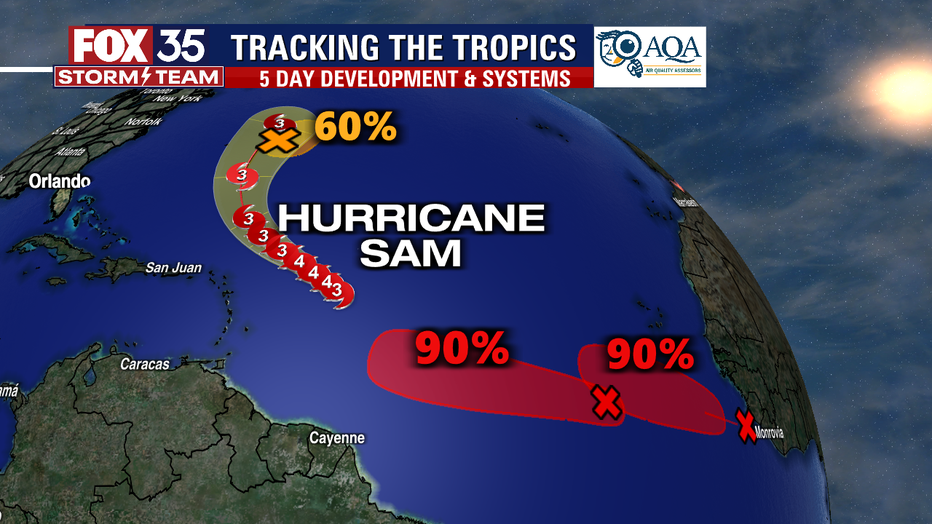 First, an area of low pressure associated with the remnants of Peter is said to be a few hundred miles southeast of Bermuda. Showers and thunderstorms have become a little better organized and environmental conditions are marginally conducive for some further development. Peter could briefly become a tropical depression again over the next day or two while moving northeastward. Formation chances are at 50 percent over the next five days. By midweek, conditions should be unfavorable for further development.

Then, the NHC said that there are disorganized showers and thunderstorms associated with a broad area of low pressure several hundred miles southwest of the Cabo Verde Islands. Environmental conditions are forecasted to be conducive for further development. A tropical depression is likely to form around midweek while it moves westward to west-northwestward. Formation chances are at 80 percent over the next five days.

Finally, a tropical wave is expected to move off the west coast of Africa on Monday, forecasters said. Upper-level winds are expected to be conducive for gradual development and a tropical depression is likely to form in a few days while the system moves westward to northwestward. Formation chances are at 80 percent over the next five days.

The next two named storms will be ‘Victor’ and ‘Wanda,’ finishing off the list of 2021 Atlantic tropical system names. At this point, forecasters will need to use the alternate list of names. In the past, the Greek alphabet was used but this was changed this year.