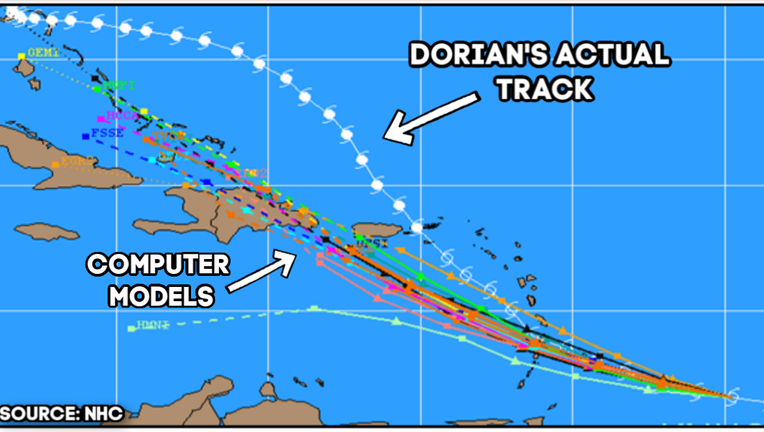 LAKE MARY, Fla. - Dorian was the strongest hurricane in modern record to make landfall in the Bahamas, however, not one model was able to capture the intensity trend of Dorian five days prior to the storm reaching peak intensity of 185 mph.

A 74-page report released by the National Hurricane Center documents the progression of the deadly Category 5 hurricane and critiques its official forecast, indicating "larger than normal errors" in predicting Dorian’s ultimate power and track.

While some of the models and the official NHC forecast suggested Dorian would slow in forward speed near the northern Bahamas, “none of them indicated that Dorian was going to stall there.”

After landfall at Elbow Cay, Great Abaco, high-pressure north of Dorian weakened causing the steering currents to collapse and the hurricane to creep slowly westward, “pounding Great Abaco for several hours with its greatest fury,” the report said.

The hurricane’s forward speed slowed even more with the eye crawling west-northwestward toward Grand Bahama Island.

The report points out that while Dorian was still in its early stages over the southeastern Caribbean Sea, most of the models incorrectly brought the storm’s center over Hispaniola.

There was a significant shift in Dorian’s track after the center of the storm passed directly over St. Lucia on Aug. 27, 2019.

The island’s wooded mountains disrupted the storm’s low-level circulation and caused the center to reform and eventually track east of Puerto Rico, contrary to all model forecasts.

These errors “resulted in the lack of adequate warning for some of the islands of the northeastern Caribbean Sea.”

The NHC report maintains the large intensity errors and failure of all models to forecast Dorian’s rapid intensification near the Bahamas are linked to Dorian’s escape of Hispaniola’s mountainous terrain.

Several NHC forecasts issued from Aug. 28-30 brought the center of Dorian over Florida.

However, the intense core of the hurricane stayed east of Florida from Sept, 3-5 due to a large mid-level trough over the eastern United States that pushed eastward.

This relieved east Central Florida from significant storm surge flooding, but a small shift in Dorian’s forward speed could have brought the hurricane over the state and extensive damage to Central Florida.

The highest observed surface wind speed was a 69 mph wind gust measured at New Smyrna Beach on Sept. 4, according to the report.