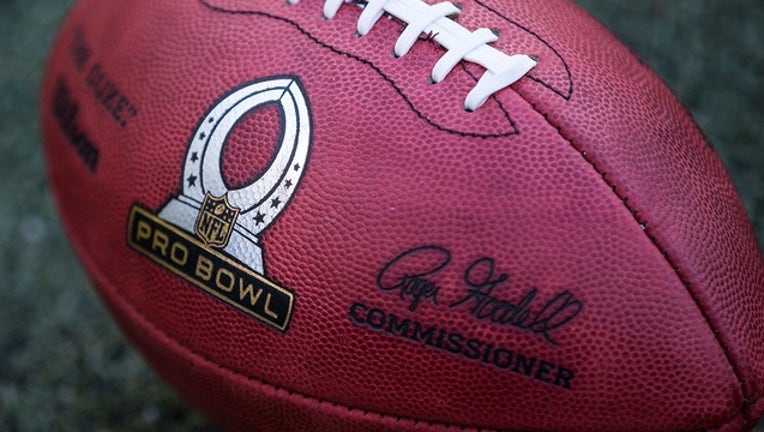 "They told me, 'If you go out there and pull a hamstring, you're going too hard,'" Jackson said.

It wasn't exactly the definitive answer Jackson was looking for, but it gave him some insight into what to expect and how to perform in the league's annual all-star event Sunday.

There's no guarantee everyone else will play at a similar pace.

With 44 players appearing in the Pro Bowl for the first time - half of the AFC and NFC rosters - it's anyone's guess how intense the game will be. It has looked more like two-hand touch than hard-nosed football in recent years, drawing some criticism.

But last year's event was far from a laugher.

The AFC rallied in the rain, overcoming a 20-3 deficit and winning 24-23 at Camping World Stadium in Orlando. Players celebrated wildly on the sideline, in the end zone and in the locker room, even chanting about doubling their paychecks.

The offensive and defensive MVPs each land a luxury vehicle, a perk New York Giants running back Saquon Barkley has made clear to teammates he covets.

"I know for a fact that Saquon is aware that there's an MVP car that's available," Giants teammate and safety/special teams ace Mike Thomas said. "I expect guys will turn it up later in the game. But knowing we're competing for MVP, how soon will it start?

"I'm still trying to figure that out. I asked. I said, 'What's the etiquette? What's the protocol for this? Guys have given different answers. I'm just going to have to feel it out. Hopefully we go over it a little bit."

"I remember Tony Romo told me, 'Whatever you do, be gentle. My back's kind of tight,'" Campbell said. "And I remember grabbing him and he shook me off and threw a pass. It was incomplete, but I was like, 'You told me to be nice and then you break my tackle!' I was hurt."

It didn't take Campbell long in practice to see this year could be different. Cornerback Jalen Ramsey, safeties Jamal Adams and Derwin James and others attacked light practiced like regular-season games. They intercepted passes during install periods and showed off for fans by pitching laterals and trying to score.

"We have a young crowd, so guys are going a little harder," Campbell said. "They're hungry. They want to get it, which I appreciate it. Back in the day, when I first got to the Pro Bowl, it was an older crowd and they were like, 'Slow down, slow down.' I was like, 'I can't help myself. I want to be great.'

"We're all competitive. We want to win. But at the same time, you want to stay healthy and have a good time. We'll play around. It's kind of like a practice at the beginning until it comes down to the end and we're trying to get the extra money and all the perks that come with winning, so guys go a little harder."

Several players said defensive linemen set the tempo by the way they attack after the snap. Some guys rush full speed, others take a half-hearted approach. And the offensive linemen react accordingly - at least early on.

"Eventually, you've got to say, 'Let's go get it,'" Tennessee Titans left tackle Taylor Lewan said. "Things will start a little slow and then they will pick up and pick up, and if the game's close in the fourth quarter, it absolutely becomes a blood bath."

No one should be surprised by that. After all, these are ultra-competitive guys with huge egos and they simply can't ignore the scoreboard - or the extra incentives that come with winning.

Added Jackson: "It's hard for a football player to go out there and just let a guy beat him. It's going to get pretty intense at some point, and the competition level is going to rise. How high? I guess we'll just have to see."

The NFL's Pro Bowl kicks off at 3 p.m. at Orlando's Camping World Stadium.