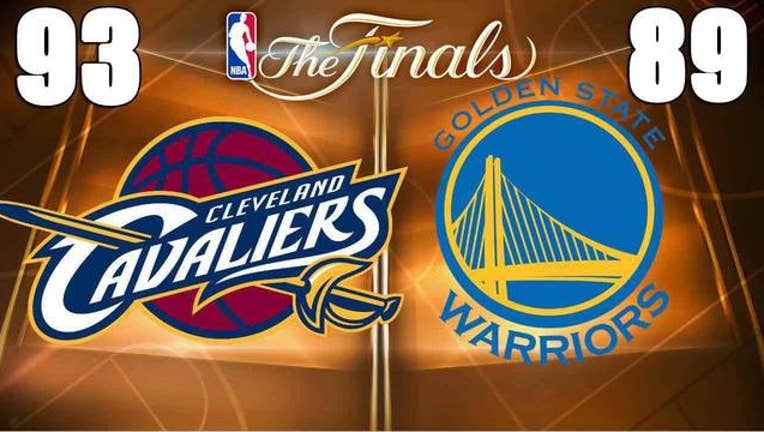 OAKLAND, Calif. (AP) - Stephen Curry tried to shake Kevin Love with a dribble and let loose with one of those long 3-pointers he seemed to make at every big moment this season.

Instead of a game-tying splash in the final minute, the ball rimmed out and so did the Golden State Warriors' chances of adding a second straight championship to a record-setting season.

"It will haunt me for a while because it means a lot to me to try to lead my team and do what I need to do on the court and big stages," Curry said. "Done it before. Didn't do it tonight."

With Curry and fellow Splash Brother Klay Thompson off all night, the Warriors capped the greatest collapse ever in the NBA Finals instead of the most successful season in league history with a 93-89 loss to the Cleveland Cavaliers in Game 7 on Sunday night.

The record-setting 73 wins in the regular season, Curry's unanimous MVP and the memorable comeback in the conference finals will all be a footnote now after the Warriors became the first team ever to lose the NBA Finals after taking a 3-1 series lead.

"It wasn't easy what we accomplished, and it's not an easy pill to swallow what we didn't accomplish," Curry said.

After blowing two earlier chances to clinch the title, the Warriors were in position for the win in the closing minutes of a tense Game 7 that had the boisterous crowd at Oracle Arena alternating between delirious cheers and nervous energy.

But the Warriors did not score after Thompson tied the game with a driving layup with 4:39 to play. Golden State missed its final nine shots with LeBron James coming out of nowhere to block what seemed like an uncontested go-ahead layup by Andre Iguodala with less than two minutes left and Curry missing his final four 3-point attempts as part of a 4-for-14 night from long range.

"We really just kind of settled too much," Curry said. "That's something that is tough to kind of swallow with the opportunity we had in front of us."

Kyrie Irving gave Cleveland the lead for good with his 3-pointer over Curry with 53 seconds left before Curry missed at the other end. After a free throw by James made it a two-possession game, Curry missed again and trudged back toward the Warriors bench as the Cavaliers celebrated the title on Golden State's home floor.

Curry sat on the bench for a few minutes as the stage was assembled for Cleveland's trophy celebration before he congratulated the victorious Cavs. He then returned to the locker room where he was still sitting in full uniform with his head in his hands nearly 30 minutes later after a disappointing ending to a season that featured a record 402 3-pointers and the first unanimous NBA MVP for Curry.

By falling short of the title, the Warriors will now be part of a debate they hoped to avoid: the best teams that failed to win a championship.

Golden State joins the 18-0 New England Patriots that lost the Super Bowl in 2008, the 116-win Seattle Mariners that fell in the 2001 AL championship series and the 68-win Boston Celtics that lost in the Eastern Conference finals in 1973 as great regular season teams that couldn't get it done in the postseason.

"We had a goal at the beginning of the year to repeat, and that goal we failed," forward Draymond Green said. "But I don't look at this entire season as a failure because there's been too many great things that happened."

After winning a record 24 straight games to start the season and pushing hard to break Chicago's record of 72 wins set in 1995-96 on the final day of the regular season, few things came easy for the Warriors in the playoffs when their nine losses matched their entire total from the regular season.

Curry missed six games in the first two rounds with injuries to his ankle and knee. Golden State then rallied from 3-1 down to beat Oklahoma City in the Western Conference finals before blowing the same lead to Cleveland a round later.

The collapse started when Green was suspended for hitting James in the groin late in Game 4. James and Irving each scored 41 points in the Game 5 win and Cleveland followed it with two more, handing the Warriors their first three-game losing streak in two seasons under coach Steve Kerr.

"This is why you can't mess around," Kerr said. "Not that we messed around, but this is why every game counts. Game 5 was really the key. That was the turning point of the whole series."

Green tried to redeem himself with 32 points, 15 rebounds and nine assists in Game 7. But with Curry and Thompson shooting 6 for 24 from 3-point range, the Warriors fell short.

"It's going to be a long three months over the summer thinking about it," Curry said. "But that doesn't mean we can't put this as another little unfortunate notch in the belt and move forward and come back stronger next year."