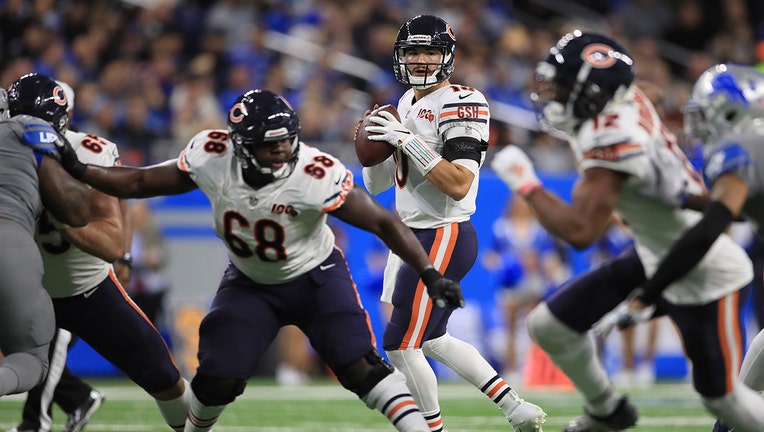 DETROIT, MICHIGAN - NOVEMBER 28: Mitchell Trubisky #10 of the Chicago Bears looks to throw a second half pass against the Detroit Lions at Ford Field on November 28, 2019 in Detroit, Michigan. Chicago won the game 24-20. (Photo by Gregory Shamus/Gett

DETROIT (AP) - Mitchell Trubisky threw a go-ahead, 3-yard touchdown pass to David Montgomery with 2:17 left, lifting the Chicago Bears to a 24-20 win over the slumping Detroit Lions on Thursday.

The Bears took the lead on the nine-play, 90-yard drive and sealed the victory on the ensuing possession with Eddie Jackson's interception.  Rookie quarterback David Blough led Detroit's last drive to the Chicago 26 in the final minute before losing 13 yards on a sack to leave a desperation pass as the only option and Jackson picked off his heave.  Chicago (6-6) has won three of four games after losing four in a row to stay in the NFC playoff picture.

The Lions (3-8-1) have lost five straight for the first time under second-year coach Matt Patricia.

Detroit led for much of the game despite starting a third-string quarterback, who it acquired from Cleveland for a swap of seventh-round picks. Matthew Stafford was out for a fourth straight game with back and hip injuries and his backup, Jeff Driskel, was limited by a hamstring injury.

Blough, an undrafted player from Purdue, threw a 75-yard TD on his first completion to Kenny Golladay to pull the Lions into a 7-all tie. Blough threw an 8-yard TD pass to Marvin Jones late in the first quarter to put Detroit ahead 14-7.

Trubisky had an 18-yard TD pass to rookie tight end Jesper Horsted to make it 17-all late in the third quarter. Trubisky finished 29 of 38 with three TDs, matching a season-high he also equaled in a win over Detroit earlier this month, for 338 yards and an interception. He got off to a strong start with a 10-yard pass to Allen Robinson and closed the game well enough for Chicago to score more than 20 points for the first time in more than a month.  Blough was 22 of 38 for 280 yards with two TDs and an interception.

Brothers Osborne, a country music duo, performed at halftime and the show did not go as planned. Fans were asked to turn on the flashlights on their mobile phones when the lights were turned off at Ford Field. After the lights dimmed, the indoor stadium was illuminated again before going dark following an awkward delay.

The technical difficulties led to the musical artists being on the field longer than expected, forcing players to warm up behind and around an elaborate stage.

Ford Field officials said in a statement that "parts of the stadium lost power due to an outside utility failure. Though it was quickly restored, the sound system transmitter required two minutes to reset and reconnect."