Brady's back and fans are ready

TAMPA, Fla. - After announcing his retirement – but then hinting at a return for what would be his 23rd season – Tom Brady said on Twitter that he will be back at 1 Buc Place for a third season with the Tampa Bay Buccaneers.

In a tweet, Brady said his "place is still on the field and not in the stands."

"That time will come. But it’s not now," Brady said. "I love my teammates, and I love my supportive family. They make it all possible. I’m coming back for my 23rd season in Tampa. Unfinished business LFG."

Brady, who most call the GOAT (greatest of all time), announced his retirement at the beginning of February after 22 record-setting years in the NFL.

He may have only played for the Buccaneers for a couple of years, but Tom Brady's legacy in the Bay Area, especially on business and marketing, will be felt for years to come.

But a week later, on the "Let's Go!" podcast, he said "never say never" to the idea of another season.

"I'm just going to take things as they come. I think that's the best way to put it. You never say never," Brady said, according to a report from the Score. "At the same time, I feel very good about my decision. I don't know how I'll feel six months from now. It may change, it most likely won't, but I try to make the best possible decision I can in the moment, which I did this last week." 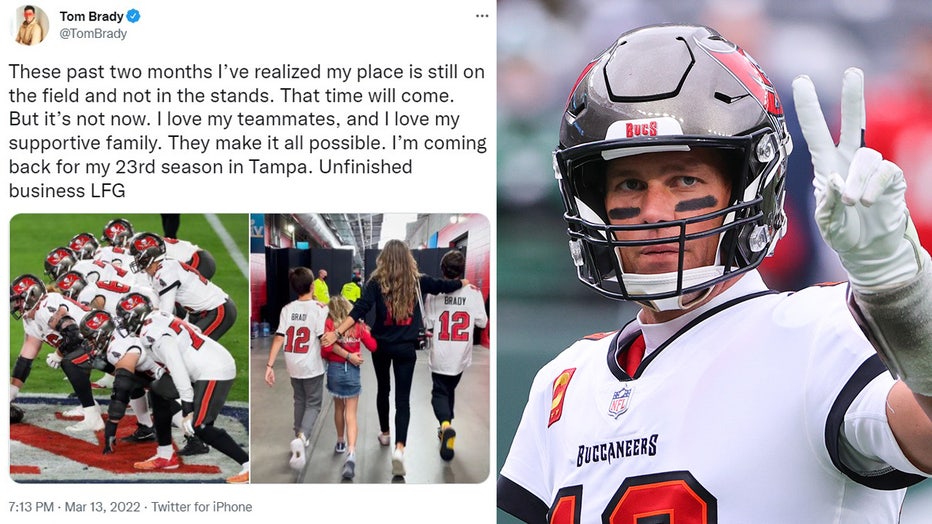 After winning a Super Bowl with the Bucs during a year plagued by pandemic setbacks, the team was dealt a loss in the playoffs by the Los Angeles Rams, who went on to win the big game in their own hometown, as Brady and the Bucs had done the year before.

Now, it appears, Brady hopes for one more trophy – and another boat parade – for the Buccaneers and Tampa Bay.

The greatest of all time gave the Tampa Bay Buccaneers the greatest two years in the team's history. Tom Brady signed on with the Bucs in March 2020 at the start of the pandemic, shocking the sports world by leaving the winningest NFL franchise for a team with the worst winning percentage in all of sports.

MORE: The GOAT gave the Bucs the greatest two years of all time

Bucs fans were left brokenhearted when they heard the rumors that Brady was retiring and may have played his last game at Raymond James Stadium.

Before his official retirement announcement, Brady said he was disappointed the rumor mill seemed to get ahead of his decision.

"I’m very blessed to play as long as I have," he said. "As things have gone on in the later parts of my career, whether that was five years ago or even this year, you know, there’s a lot of interest in when I’m going to stop playing. And I understand that. It’s not that I don’t recognize that. It’s just when I know I’ll know and when I don’t know, I don’t know, and I’m not going to race to some conclusion about that."

She was a Patriots fan long before Tom Brady came to New England, but when he came to Tampa, this Pasco County woman became a super fan.

The 44-year-old quarterback said he wanted to spend more time with his wife, supermodel Gisele Bundchen, and three children, but upon some time to reflect, it appears Brady can't let the game he loves go just yet.

He was under contract for 2022 with the Tampa Bay Buccaneers, coming off one of the best seasons in his 22-year career before he announced he was leaving the game.

Whenever Brady does decide to walk away from football, he will likely still be the NFL’s career leader in numerous passing categories and the most prolific winner.