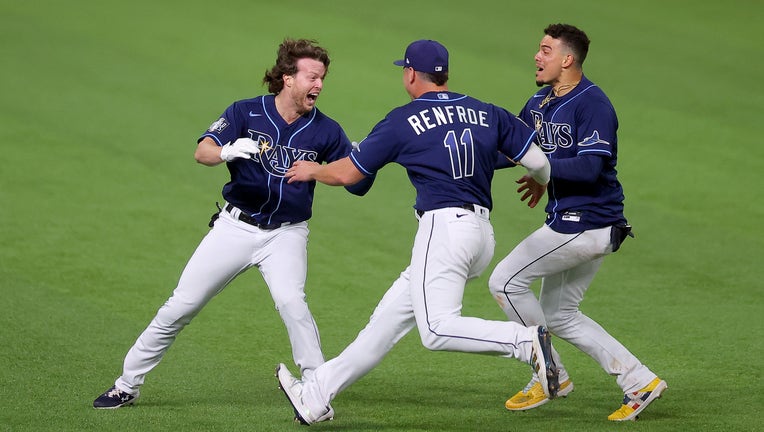 ARLINGTON, TEXAS - OCTOBER 24: Brett Phillips #14 of the Tampa Bay Rays is congratulated by Hunter Renfroe #11, and Willy Adames #1 after hitting a ninth inning two-run walk-off single to defeat the Los Angeles Dodgers 8-7 in Game Four of the 2020 ML

ARLINGTON, Texas - The Tampa Bay Rays pulled off a stunning rally in the bottom of the ninth inning when Brett Phillips' two-out single and a pair of Dodgers misplays resulted in two runs that beat Los Angeles 8-7 and tied the World Series at two games each.

In a game full of late drama, the final turn came out of nowhere.

Kevin Kiermaier blooped a single with one out off Kenley Jansen and Randy Arozarena walked with two outs.

Phillips, who batted a combined .196 for Kansas City and Tampa Bay this year, hit a soft single that Chris Taylor bobbled as the tying run scored.

Arozarena appeared to be a sure out when he stumbled halfway home, but catcher Will Smith lost control of the ball as he spun around for a tag, allowing the winning run to score.

A 26-year-old from Seminole, Florida, Phillips was drafted by Houston and played for Milwaukee and Kansas City before Tampa Bay acquired him in August for a minor leaguer. Touted for his outfield defense, he hasn't hit much in the majors, ending the regular season with a career .202 average in 153 games. He had been 0 for 2 in the postseason and hadn't batted since Game 3 of the AL Division Series on Oct. 7.

Phillips was left off the AL Championship Series roster but shined as a cheerleader, writing up phony scouting reports on a clipboard touting Arozarena before dancing against him in battles after the team locked up the AL pennant.

"What a great team effort on this win. It took almost 28 guys," Phillips said. "That's what special about this team. Just all come together, our one goal is to win. We don't rely on one guy. It takes everyone, and man, baseball is fun."

Advertising: Enter the NFL Challenge contest on the FOX Super 6 app for free and you can win the $1M jackpot! Download now.