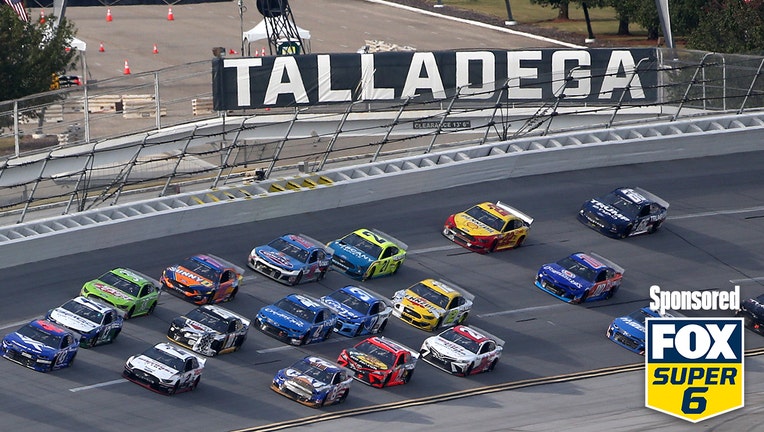 The traveling NASCAR roadshow heads to Talladega this week for the Geico 500.

And you can keep camping right on along with the best drivers in the world with FOX Super 6 Stage 2 contest.

After Alex Bowman’s win last weekend at Richmond, the focus goes from short tracks back to superspeedways. Denny Hamlin continues to dominate the stages, winning two of them last week to up his season leading stage total to five – even without a race win. That’s why Hamlin leads the NASCAR Cup standings.

The Sunday race is a great time to get involved in the FOX Super 6 Stage 2 contest. If you can get the right answer to all six questions regarding Stage 2 of Sunday’s race, you can win $25,000 of Clint Bowyer’s money and a brand new RV 6 from Camping World. Best of all, it's free! Just download the FOX Super 6 app and make your picks now.

Here’s a look at some of the questions for Sunday’s race:

Which driver will have the best finishing position at the end of Stage 2?

It is tough to overstate how dominating Hamlin has been in stages to this point this year. The two stage wins last week on the short track at Richmond helped him extend his lead. He has two wins and nine Top 5s in 30 starts at Talladega, so he has some strong success. He won the second race there last year so that success is recent as well.

Which of these drivers will have the most laps led by the end of Stage 2?

Hamlin is again the popular pick in this spot, but keep an eye on Logano here. Of these drivers, Logano is second in most laps led this season behind Hamlin, who has led a ridiculous 694 laps. Logano also has three wins at Talladega in just 24 starts, with eight Top 5s.

How many cautions will there be by the end of Stage 2?

October’s race at the superspeedway had a whopping 13 cautions in it. While the spring race tends to be a lower caution event – the last two Geico 500’s also went with under 10 yellows – a higher pick could be a good choice.

How many lead changes will there be by the end of Stage 2?

The 2020 Geico 500 had 57 lead changes for the entire race. The fall race also went into the 50s as well. In other words, leaders are not lasting long on this track, which is why the racing tends to be outstanding.

Which manufacturer will have the most cars in the top 10 of Stage 2?

Ford’s have traditionally raced well at Talladega, winning 10 of the last 13 races there. Hamlin’s win in October was the first for Toyota since Hamlin’s win in 2014. When you consider the history, Ford is a pretty good pick here.

Which team will have the most drivers in the top 5 of Stage 2?

Again, Hamlin and Martin Truex have Joe Gibbs racing sitting 1-2 at the present time and that’s a pretty powerful punch. However, Penske could be a major factor here in breaking into the Top 5.

Play Clint Bowyer's NASCAR Stage 2 FOX Super 6 contest for free, and you could win $25,000! Just download the FOX Super 6 app, and make your picks now for your chance to win!