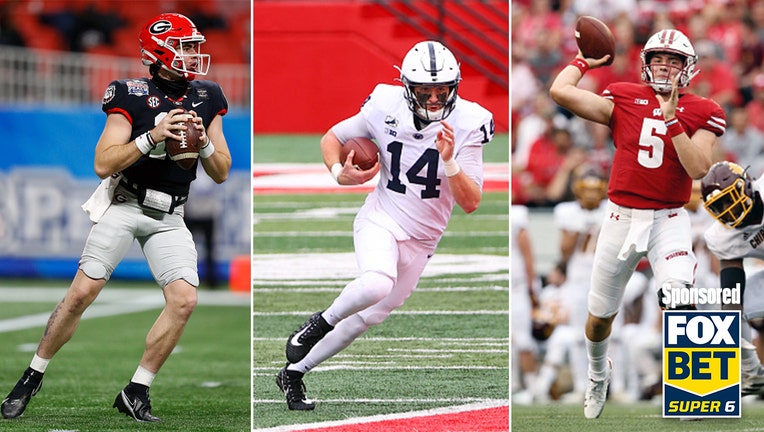 It may not be homecoming weekend. But it does give you that warm and fuzzy feeling when you return to campus.

Yes, there were a few games last weekend to officially get the 2021 college football season off during Week 0. But when you see the names on the marquee to start a huge Labor Day weekend on the gridiron, this has always seemed like the start line.

Grab a seat in that recliner, put fresh batteries in the old remote (with the tablet on the table in front of you for a multi-screen experience) and get ready for Saturday to feel awesome again.

And while you are at it, take a shot at winning big with FOX Bet Super 6. Pick the winners of all six marquee games with their margins of victory and you could win the grand prize of $25,000. It’s fast, and it’s free, and all it takes is downloading the FOX Bet Super 6 app on your phone or mobile device.

The biggest question for the Cardinal is how do you replace Davis Mills, who had a very nice senior season and was drafted by the Houston Texans? (That could be viewed as a punishment, as well.) Jack West and Tanner McGee were the main combatants for the job and David Shaw didn’t tip his hand coming in. Meanwhile, Kansas State will get quarterback tandem of Skylar Thompson (injured most of last season) and Will Howard back. Both have shown glimpses. We’ll go with the veterans on this one.

Camp Randall gets to "Jump Around" for the first time with fans since 2019 and it has a legitimately awesome game on its turf. Penn State can move the football so there will be pressure on Sean Clifford. But the Lions have also struggled in these big marquee games on the road under James Franklin. And while they have won four straight in the series, it is Wisconsin that probably has the deeper roster and a sense of needing this one for national attention. Expect big numbers from Graham Mertz.

The defending national champions open their season in marquee fashion against a Miami team trying to recapture some of the magic they had in last year’s 8-3 campaign. Yes, Alabama has to replace Mac Jones, DeVonta Smith, Jaylen Waddle, Najee Harris and a bunch of other NFL Draft selections. But Nick Saban always reloads, and Bryce Young is one of the most celebrated young quarterbacks in the country. Miami has D’Eriq King back at quarterback, but he's in his first game after a major bowl injury last year. This feels like Saban sends a statement.

The 500th game at Ross-Ade Stadium features the Boilermakers trying to bounce back from a second-straight losing season. Games like this are critical to both Jeff Brohm’s Purdue squad and Jonathan Smith’s Beavers. Oregon State will turn to Colorado transfer Sam Noyer at quarterback. Purdue has quarterback Jack Plummer, who saw some action in ’20.

Dabo-mania took off on a Saturday night national television game in 2013 when Clemson earned a 38-35 win over the Dawgs that launched them into the upper echelon of college football. The Tigers are 100-12 since then, with four title game appearances and two national championships. Georgia has made one CFP appearance and Kirby Smart is still looking for that ring. If they can’t take advantage of the Tigers without Trevor Lawrence, Travis Etienne and company, it will not be a happy fall for Georgia. The Bulldogs need this game with the tough SEC road up ahead. This is the JT Daniels "I want to be in the Heisman conversation" game.

These are two teams with coaches who might be on the hot seat – Ed Orgeron at LSU, Chip Kelly at UCLA – who clash in the Rose Bowl. Kelly and the Bruins had a really good start last week, blitzing Hawaii 44-10 to open the season. Zach Charbonnet, who transferred from Michigan, had three rushing touchdowns as Kelly won his first opener in four years at Westwood. Orgeron’s issues are more off the field with an NCAA investigation, but another uncertain quarterback situation in Baton Rouge is not good for the survival of a head coach. A loss here will start the drumbeat.

Download the FOX Bet Super 6 app now to predict the outcomes of the biggest events in sports, and you could win thousands of dollars absolutely for free each and every week. Just download and play!