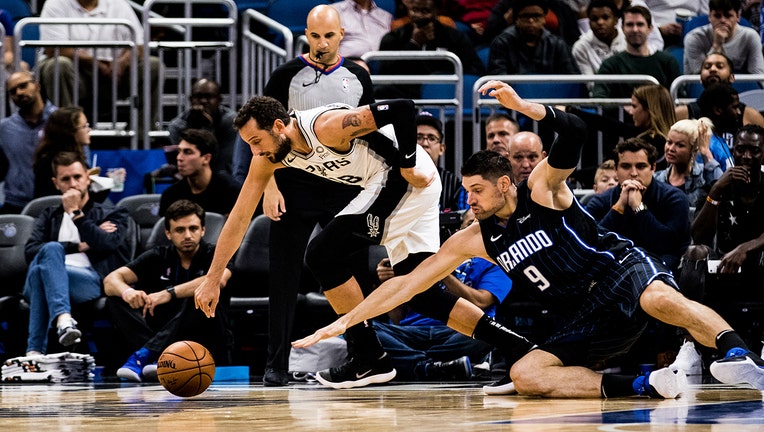 ORLANDO, FLORIDA - NOVEMBER 15: Nikola Vucevic #9 of the Orlando Magic and Marco Belinelli #18 of the San Antonio Spurs fight for control of the ball in the second quarter at Amway Center on November 15, 2019 in Orlando, Florida. (Photo by Harry Aaro

ORLANDO, Fla. - The NBA on Monday announced that Orlando Magic center Nikola Vucevic has been named the NBA’s Eastern Conference Player of the Week for the previous week, marking the third time that he has won the award during his career. He also earned it for the periods ending Mar. 30, 2014 and Nov. 18, 2018.

A 2019 NBA All-Star, Vucevic has played and started in all 13 games this season, averaging a team-high 18.2 ppg., a team-high 12.1 rpg., 3.4 apg. and 1.08 blkpg. in 32.3 minpg. He has led (or tied) the Magic in scoring six times, in rebounding 11 times and in assists three times. Vucevic has also recorded a team-high ten double-doubles. As of Nov. 18, he ranks fourth in the NBA in double-doubles, tied for seventh in rebounding and ranks 31st in blocked shots.

Information provided by the Orlando Magic.