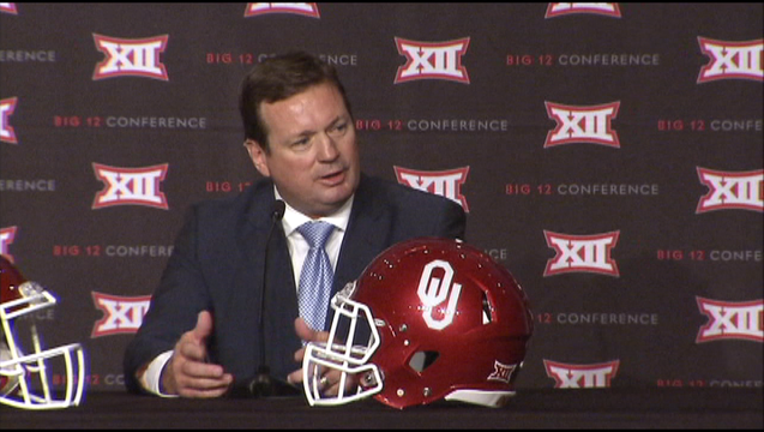 Oklahoma coach Bob Stoops abruptly announced his retirement Wednesday, a stunning offseason move by the 56-year-old future Hall of Famer who led the Sooners to 10 conference championships and a national title in 18 seasons.

Stoops was the longest-tenured active coach in major college football, taking the job at Oklahoma a day before Kirk Ferentz started at Iowa. Stoops was 190-48 (.798) at Oklahoma -- his only college head-coaching job -- giving him more victories than Sooners coaching greats Barry Switzer (157) and Bud Wilkinson (145).

"I understand there has been some speculation about my health," Stoops said in a statement issued two hours before a campus news conference. "My health was not the deciding factor in this decision and I've had no incidents that would prevent me from coaching. I feel the timing is perfect to hand over the reins."

Offensive coordinator Lincoln Riley, 33, is being promoted to head coach, making him the youngest head coach in FBS. Just last month, Oklahoma gave Riley a three-year contract extension worth $1.3 million per year, making him one of the highest-paid coordinators in the country.

"The time is now because Lincoln Riley will provide a seamless transition as the new head coach, capitalizing on an excellent staff that is already in place and providing familiarity and confidence for our players," Stoops said. "Now is simply the ideal time for me and our program to make this transition."

Riley takes over a team that will again be the favorites to win the Big 12 and a College Football Playoff, with a Heisman Trophy finalist in quarterback Baker Mayfield. His first game will be at home against UTEP on Sept. 2. His second game will be at Ohio State.

Stoops was 39 when he left Florida, where he was defensive coordinator under Steve Spurrier, to take over at Oklahoma in 1999. The storied program had struggled for more than a decade to replace Switzer. Stoops quickly returned Oklahoma to national prominence, winning a national championship in his second season with a win over Florida State.

His early success that included three straight victories in major bowls and a five-game winning streak against Texas earned him the nickname "Big Game Bob."

While Stoops was not able to bring another national championship to Norman, he did lead Oklahoma to three more BCS championship games and a spot in the College Football Playoff two years ago.

Spurrier said the retirement was not a complete shock.

"There is life after coaching and once he decided the time was right, he was going to move on," Spurrier said. "He wanted to go out at the right time and he feels good about where the program is right now."

Big Game Bob wasn't delivering the biggest wins, but the program was as consistent a national power as any in the country during his tenure. Only four times in Stoops' career did the Sooners win less than 10 games, and he never had a losing record.

"Few athletics directors get a coach who better combines success and cohesiveness like Bob Stoops," Oklahoma athletic director Joe Castiglione, who hired Stoops. "I can't help but feel somewhat sad today because Bob has been such a constant in my life, and that's why I am so thankful that he will remain with us. He will continue to do great things for OU."

Former Sooners cornerback Aaron Colvin, now with the Jacksonville Jaguars in the NFL, took to Instagram to thank Stoops.

"Thank you for giving a skinny broke kid with 3 stars a chance," he wrote. "I will forever be grateful to the opportunity you gave me."

The son of a football coach from Youngstown, Ohio, Stoops is one of four brothers who became college football coaches. His father, Ron, died at 54 of a heart attack suffered while coaching a high school game.

Bob Stoops and his wife, Carol, have three children. A daughter attends Oklahoma and twin sons are seniors in high school who are potential major college football players.